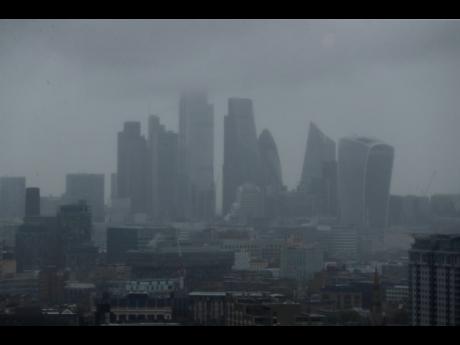 The Associated Press
The skyline is seen through the rain and mist in London, Monday June 10, 2019.

The outlook for the British economy may remain murky amid the Brexit impasse, yet the country continues to post impressive jobs growth, which is helping wages rise back to the levels they were before the global financial crisis more than a decade ago.

A raft of labour market figures released Tuesday highlighted that the labour market remains strong despite the lack of clarity over how Britain’s scheduled departure from the European Union will play out.

The Office for National Statistics reported that the employment rate in April stood at 76.1 per cent, its joint-highest level since records began in 1971, and unemployment was at 3.8 per cent, its lowest level since 1974. The jobs being created are largely full-time positions and are going primarily to women.

The resilience in the labour market is helping to push up wage increases back towards the levels they were before the global financial crisis. Average weekly earnings excluding bonuses, were 3.4 per cent higher in the three months to April compared with a year ago, about a percentage point below the rate of growth before the crisis.

Despite the Brexit uncertainty, rate-setters at the Bank of England are coming under pressure to raise interest rates again, especially as the economy continues to grow, albeit fairly modestly. Two members of the Monetary Policy Committee, MPC, Andrew Haldane and Michael Saunders, have indicated that they could back another rate rise sooner than many in the markets think, largely because of worries that rising pay will stoke inflation, which, at an annual rate of 2.1 per cent, stands above the bank’s two per cent target.

“I want to stress that the MPC does not necessarily have to keep rates on hold until all Brexit uncertainties are resolved,” Saunders said Monday.

“There would be costs if we delay tightening until all the potential warning signs across pay, capacity and prices are flashing red. Such an approach would make it less likely that tightening would be limited and gradual, and more likely that the economy would face a painful adjustment.”

The pound rose somewhat on expectations that the central bank could support another quarter-point interest rate rise this summer to one per cent. The currency was up 0.2 per cent at US$1.2710.

The prevailing view in the markets is that the Bank of England will keep rates unchanged at its policy meeting next week, but that a majority of the nine-member panel may back an increase in August alongside the bank’s latest economic forecasts.

Brexit remains a quandary for the Bank of England, especially during the Conservative Party leadership contest to see who replaces Prime Minister Theresa May. Whoever succeeds May will face the same difficulties in pushing through Parliament a plan ahead of the October 31 Brexit deadline.

Though Brexit uncertainty has weighed on business investment since the country voted to leave the EU in June 2016, growth overall has remained solid. However, figures on Monday suggested that the outlook could be worsening. Though monthly figures are volatile, concerns were raised by the news that the economy contracted by 0.4 per cent in April, largely because of car plant shutdowns from the likes of Jaguar Land Rover and Honda.