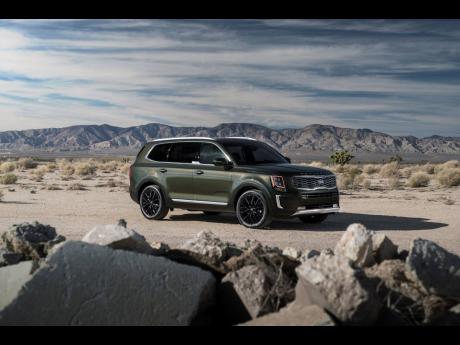 The Associated Press
This undated photo provided by Kia shows the 2020 Kia Telluride.

The Honda Pilot has always been a strong choice for a midsize three-row crossover SUV. But Kia has recently introduced an all-new model known as the Telluride, that it hopes will attract shoppers with its bold styling and value.

The basics are similar. Both the Pilot and the Telluride roughly occupy the same amount of garage space, seat up to eight people, and come with standard V6 engines. But there are significant differences. Edmunds compares them to find out if the new challenger has what it takes to upset the status quo.

Most Pilot and Telluride models have a middle-row bench seat and can seat eight, though the priciest models have captain’s chairs and can seat seven. Both are impressively roomy, but the Kia, partially because of its slightly larger windows, comes across as the airier SUV. The Telluride’s interior is also made from richer materials and is a little more interesting to look at.

It has a longer wheelbase (the distance between the front and rear wheels), which Kia uses to provide four more inches of middle-row legroom compared to the Pilot. Besides the obvious comfort advantage, this extra space also provides more seat-sliding leeway and versatility when installing child-safety seats. Taking on a full load of passengers? It’s a tighter squeeze to get into the Pilot’s third row, but there’s a smidgen more width and headroom once you’re seated. In the end, both third-row seats are suitable for kids as well as average-size adults.

The Pilot and the Telluride hold similar amounts of cargo with their rear seats folded. The biggest difference comes when the third row is up and in use. Here, the Kia holds a clear advantage (21 cubic feet versus 16.5 cubic feet) that amounts to 27 per cent more space.

The Pilot LX starts at US$32,495 with destination charges included. The base Telluride LX costs US$32,735. The Kia’s slightly higher base price includes the extra safety gear plus Apple CarPlay, Android Auto and more USB ports. You have to move up to the EX trim level to get those on the Honda.

The Kia’s price advantage becomes obvious if you want leather and navigation. You’ll pay US$38,135 for a Telluride EX, but US$40,805 for a Pilot EX-L with navigation. You do get a rear-seat entertainment system with that Honda, though. Kia maintains its pricing advantage at the top, too. The priciest Telluride SX with the Prestige package costs US$46,535. A Pilot Elite is US$49,065.

All-wheel drive, or AWD, is generally an option. It costs you US$1,900 on the Pilot and US$2,000 on the Telluride. The Kia’s slightly higher cost is justified because you get an AWD lock feature that can enhance traction on unpaved surfaces.

Each SUV is powered by a V6 engine that provides strong power when you need to get on to the highway or make a quick pass. The Kia’s is rated 11 horsepower higher, but in our testing, we’ve found the Pilot is actually a half-second quicker to 60mph. All Tellurides come with an eight-speed automatic transmission. Honda fits most Pilots with a six-speed automatic, though the Touring and Elite trim levels get a nine-speed that helps boost fuel economy slightly. As such, the fuel economy advantage shifts between the two SUVs, depending on which configuration you choose.

Both the Pilot and the Telluride do a good job of filtering out road imperfections while holding the vehicle steady through sweeping turns. But the Telluride is a bit better at doing truck-like things. An AWD Pilot can tow 5,000 pounds, but the front-wheel-drive version is limited to 3,500 pounds. Kia says front and all-wheel-drive versions of the Telluride can tow 5,000 pounds, and its optional load-levelling rear suspension provides added support for trailer and cargo loads.