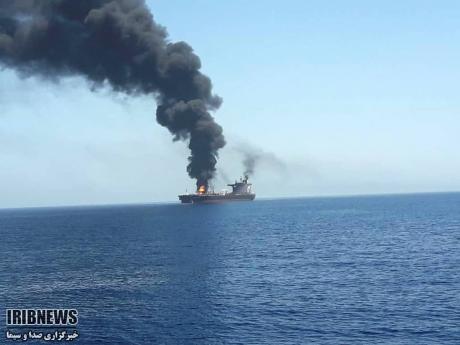 The Associated Press
AP In this photo released by state-run IRIB News Agency, an oil tanker is on fire in the sea of Oman on Thursday, June 13. Two oil tankers near the strategic Strait of Hormuz have been reportedly attacked. The alleged assault on Thursday left one ablaze and adrift as sailors were evacuated from both vessels. The US Navy rushed to assist amid heightened tensions between Washington and Tehran.

The suspected attacks on two tankers near the Strait of Hormuz, between Iran and Oman, have renewed concerns about the vulnerability of world energy supplies to military tensions in a highly volatile region.

About a fifth of all oil traded around the world goes through a body of water just two miles wide, so any conflict that threatens tankers could cause huge disruption to crude supplies for energy-hungry countries, particularly in Asia.

Here’s a look at the oil shipping through the region and its importance for the global economy.

Two oil tankers near the Strait of Hormuz suffered suspected attacks on Thursday. In all, 44 sailors were evacuated from the vessels and the US Navy has assisted amid heightened tensions between the United States and Iran.

The incident comes after the US alleged that Iran used mines to attack four oil tankers off the nearby Emirati port of Fujairah last month. Iran has denied being involved. Meanwhile, Iranian-allied rebels in Yemen have increased their missile and drone attacks on Saudi Arabia, which has been at war in Yemen against the rebels since 2015.

The Strait of Hormuz is the narrow mouth of the Persian Gulf. It is in the territorial waters of Iran and Oman, which at its narrowest point is just 33 kilometres or 21 miles wide. The width of the shipping lane in either direction is only 3km, or two miles. It flows into the Gulf of Oman, where ships can then travel to the rest of the world.

About 20 per cent of all oil traded worldwide passes through the strait. Some 18.5 million barrels of oil are transported through it every day from major OPEC energy producers Saudi Arabia, the United Arab Emirates and Kuwait.

About 80 per cent of that goes to fast-growing, energy-hungry countries in Asia, including China, Japan, India and South Korea. The Japanese government said the tankers’ cargo was related to Japan – and the attacks occurred just as Japanese Prime Minister Shinzo Abe was visiting Iran to ease Iran-US tensions.

The strait is also used to export about a third of the world’s liquefied natural gas (LNG), from Qatar, the world’s biggest LNG producer.

Anything affecting the narrow passage ripples through global energy markets, raising the price of crude oil. That then trickles down to consumers through what they pay for gasolene and other oil products.

The US and international benchmarks for crude oil were up about three per cent on Thursday. That’s a relatively big daily increase, but it also comes after a sustained drop in oil prices.

The international benchmark, Brent, is at US$61.75 a barrel. That’s up three per cent on the day – but down from over US$74 in late April. Prices have been declining on expectations that the global economy will slow, using less energy, as well as strong supplies. Analysts say that tensions in the Gulf region could push prices up again in the longer term, if they are protracted and there is a real threat to the flow of supplies.

How the US and Iranian governments react to the event will be key. The United States has recently moved more military forces into the region, which already hosts the US Navy 5th Fleet in Bahrain and the forward headquarters of the US military’s Central Command at the vast Al-Udeid Airbase in Qatar.

Iran has set a July 7 deadline for Europe to find new terms for Tehran’s nuclear deal with world powers. That accord began to unravel after the Trump administration unilaterally withdrew from the Obama-era deal and reimposed US sanctions aimed at crippling the Iranian economy and pressuring a change in its regional policies. Iran has threatened it could resume higher levels of Uranium enrichment.