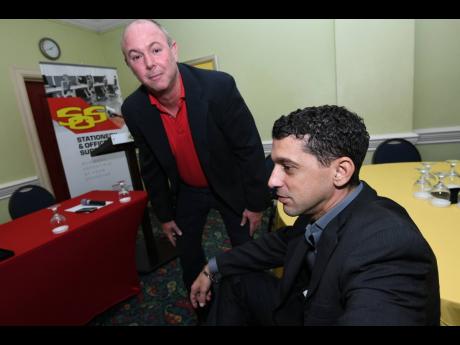 It will allow the company to hold larger inventory and speed up bulk sales.

The warehouse is to be developed on lands at Collins Avenue, which links to SOS’ Beechwood Avenue head office in Kingston.

“In terms of price, I cannot give you that now, because we are still negotiating,” said Deputy General Manager Allan McDaniel. However: “Our last pricing for the warehouse worked out to US$25 to US$30 per square foot,”, he said at the company’s annual general meeting on Tuesday in Kingston.

The development is set to start this year, but financing remains under discussion. SOS holds $54 million in cash as at March and McDaniel ruled out a preference share offer when quizzed by the Financial Gleaner about financing of the project. The warehouse will house inventory for both its book-making operation, SEEK, as well as furniture.

The property on Collins Avenue was acquired over a year ago. Over time, SOS intends to grow its warehousing space at the property to 20,000 square feet – as outlined in its prospectus for listing on the junior market last year – adding to the Beechwood complex, which holds a 35,000-square-foot warehouse.

SOS said Tuesday that its outlook on business remains favourable, saying core sales of office supplies continue to grow to record levels, and that manufacturing sales at SEEK are on track to surpass last year.

The company earned $343 million in first-quarter sales, up 23 per cent year-on-year. January was a record period for the company, which recorded its best-ever monthly sales at $125 million. Profit jumped 30 per cent to $57 million in the March quarter.

McDaniel downplayed concerns that the company sales are peaking. He added that core business continues to grow, along with new projects in the pipeline.

“To be honest, five years ago, I thought we reached our peak,” he quipped. “A lot of people look outside our industry and say, ‘there has to be an end’, but there really doesn’t.”

The office supplies industry is as large as you want it to be, he added. “Last year, we were at $83 million on average per month in sales, and now we are up to $100 million-plus. We do not think it is going to end. We don’t think the growth will stop.”