Fighting sexual harassment in the workplace 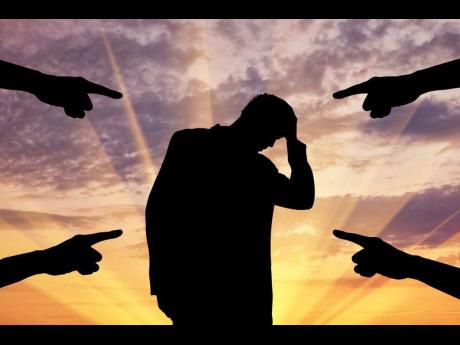 Silhouette of man and condemning the hands

Each Wednesday, I make a what-to-write-about decision. Should my column be a response to a reader’s question? Or should I express an opinion about a topical and more challenging issue? Last Wednesday, I opted for the safer alternative.

Part of that evening was devoted to thinking about the contents of the proposed article before I sat down in front of my desktop. That plan went up in smoke the next morning after I read senior Gleaner writer Janet Silvera’s article. It was about allegations of sexual misconduct at the Edna Manley College of the Visual and Performing Arts.

Ms Silvera reported on the newspaper’s front page that the college chairman “reacted with shock at the principal’s revelation that she (the principal) had previously warned a lecturer who was recently sent on leave as a result of alleged sexual misconduct”.

The principal was also said to have admitted to a parliamentary committee earlier that week that “when a faculty member complained … that students were raising allegations of sexual misconduct, she warned the alleged offender”. For some reason, the alleged offender, according to the article, was most inappropriately referred to as ‘the gentleman’ by the principal.

The board chairperson’s reaction to the college principal’s comments was equally unfortunate. She did not tell The Gleaner that the board had planned an emergency meeting to discuss and agree on a policy to mitigate future risks of sexual harassment at the institution.

Instead, she was reported to have said that “the principal has put herself in jeopardy, and we (the board), have called an emergency meeting for Thursday morning, where we expect the principal to respond to questions related to her admission in Parliament.” Really?

Sexual harassment is widespread in Jamaica. In the USA, misconduct charges have been levelled against household names and members of the powerful elites. Even local legislators, who are not known for speed in law-making, are aware of these facts. They drafted in 2015, but have not passed, legislation that “prohibits unwelcome physical contact or advances of a sexual nature such as a demand or request for sex or sexual favours”.

The bill provides a framework for offenders to pay civil damages in court to persons whose feelings have been injured or who have suffered humiliation as a result of sexual harassment. Sexual harassment was defined as “the making of any sexual advance towards a person, by another person, which is reasonably regarded as unwelcome, offensive, or humiliating by the person towards whom the advancement is made”.

When Parliament indicated its intention to pass a new law to prevent sexual harassment, organisations, institutions, their leaders and other individuals were required to pay attention. What policies, procedures, and best practices should we implement to comply with the law? Can we learn from the experiences of neighbouring and other countries how to deal with this emerging class of risk?

Shouldn’t a tertiary educational institution where the top leadership, faculty, and student body is predominantly female proactively develop plans to reduce these risks and manage allegations of misconduct when they occur? Were questions like these raised by members of EMCVPA’s board? If they were not, board members should be fired. Governance is, ultimately, the responsibility of the board.

Below are 15 things that employers can do to create a harassment-free workplace based on guidelines from the British Columbia Human Rights Commission manual:

n Make it clear that workplace harassment will not be tolerated;

n Provide education and information about harassment to all staff on a regular basis;

n Staff should also be informed of the best way of coping with aggression by means of guidelines and staff-development programmes on sexual harassment at work;

n Develop an anti-harassment policy together with employees, managers, union representatives, and board members;

n Make sure that all managers and supervisors understand their responsibility to provide a harassment-free work environment;

n Ensure that all employees understand the policy and procedures for dealing with harassment – new and long-term employees alike. This involves training, information, and education;

n Make sure the policy applies to everyone, including managers and supervisors;

n Promptly investigate and deal with all complaints of harassment;

n Provide protection and support for the employees who feel they are being harassed;

n Monitor and revise the policy and education/information programs on a regular basis to ensure that it is up to date;

n Provide a mechanism for addressing sexual harassment in a confidential and sensitive manner after a grievance has been filed;

n A well-constructed and implemented plan within an organisation may stop inappropriate conduct before it creates a problem for individual employees or the company.

Section 3(2) of Part II of the local bill says: “A person in charge of an institution shall make every reasonable effort to ensure that the students … of that institution are not sexually harassed.” This duty appears to be an extension of an employer’s long-established obligation to provide employees with a safe place of work.

The EMCVPA’s board appears by its actions to be reactionary instead of proactive. It should be developing strategies to prevent future acts of sexual harassment instead of trying to scapegoat the institution’s principal.