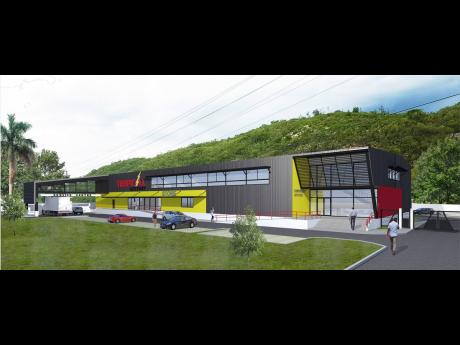 A graphic representation of the new Tropical Battery headquarters to open in October 2019 at the Kingston 876 complex under development by Cascade Group.

Cascade Group Jamaica, the developer of the Kingston 876 commercial complex, is sifting through potential investors for lots that are expected to be ready for delivery in August.

Infrastructure works at the 94-acre complex, which sits at the corner of Tom Cringle Drive and Mandela Highway at Ferry, Kingston, is roughly 70 per cent complete. The complex is already home to Nestle Jamaica and more recently, Tropical Battery.

Kingston 876 is eventually expected to host 30-35 operations, some of which will be part of a warehousing hub that Cascade Group CEO Fredrik Moe is planning for the commercial complex.

Cascade is selling the lots to individual investors, who will develop their own structures.

Three years after pumping a $2 billion into the construction of 7,000-square-metre distribution hub for Nestlé Jamaica, Cascade Group has also inked a deal with Tropical Battery which is looking to open its new headquarters at Ferry in October. Tropical Battery Vice-President of Sales and Marketing Daniel Melville told the Financial Gleaner that the company has outgrown its warehouse space at its current base at Ashenheim Road.

“We seeded the project and got Nestlé to build a distribution facility there and now we’ve opened up the property and interest started to come in,” Moe said of the current interest by investors in Kingston 876. “We are also very excited about the highway development,” he said.

Aside from the deals with Nestlé Jamaica and Tropical Battery, Moe has sold 0.9 acres, or 39,204 square feet, of space at Lot 31 Ferry Pen to human resource management and staffing supply firm, CEAC Outsourcing Company Limited.

CEAC will use the space to develop a business process outsourcing or BPO facility spanning 100,000 square feet but, so far, has only laid the foundation for the building. The BPO centre is expected to be finalised and become operational over the next four to eight months.

In the interim, CEAC has applied to the National Environment & Planning Agency, (NEPA), for a permit to utilise a portion of the lot for the storage and operation of an incinerator until the building is completed and ready for tenancy.

Moe said the remainder of the 94-acre property, for which the full development cost is about $30 billion, is being developed for businesses operating in the manufacturing, industrial, logistics or warehousing sectors.

“We hope to complete infrastructure work by the end of August and we are willing to sell to people who will put up a building. We don’t want to have a wasteland out there over the years, so we are selling to people who we know are going to construct something,” Moe said.

He reckons that the overpass that connects the development to the Mandela Highway will serve as a sweetener for potential investors looking for commercial space on the outskirts of Kingston.

“We are perfectly situated on the edge of Kingston with direct access to the North Coast Highway and we are also only 10 minutes away from the Kingston Wharves. The highway modification makes it an easy run coming into our development from anywhere,” the developer said.

When Cascade Group broke ground for the Nestlé operation in June 2016, Kingston 876 was projected to bring an additional 10,000 jobs to Jamaica by 2021, at least 2,000 of which were expected to come from the BPO operation.

“Nestlé brought in some of those jobs with the distribution centre and now we have Tropical Battery. I think that as the development starts to come into its own in another two years, the jobs will come, particularly from the BPO sector,” Moe said.

The Cascade Group intended to register Kingston 876 under the Caymanas Special Economic Zone, but those plans have changed.

Under the law governing special economic zones (SEZs), developers in the zones would receive a raft of tax incentives but must have a minimum paid-up capital of US$1.5 million, while the occupants of a designated SEZ must have US$25,000 of paid-up capital.

Incentives for SEZ occupants include corporate income tax of 12.5 per cent, a zero-tax policy on dividends, and rental of property within the zone and tax credit against funds spent on research and development, capped at 10 per cent of taxable income, among other incentives.

Moe hit some speed bumps in trying to get the commercial park registered under the Caymanas SEZ.

“We realised it wasn’t feasible; too many varying operations happening out there, so we didn’t fit the requirements. That isn’t to say that individual businesses can’t qualify, they can do it on their own,” he added.