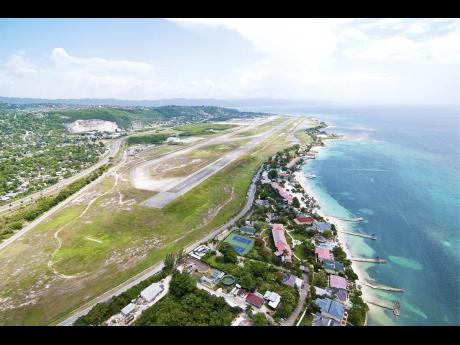 An aerial shot of the Sangster International Airport runway.

The extension of the runway at the Sangster International Airport and associated works are scheduled to start in the final quarter of 2019, but the extension requires the acquisition of lands held by Sandals Resorts International.

Negotiations for the land are ongoing between the Airports Authority of Jamaica, AAJ, and Sandals, planning documents show.

The runway project involves three components: the initial stage, which requires relocation of a section of Kent Avenue, a road between the airport and the sea; the extension of the runway beyond three kilometres; and then shoreline protection works.

To allow for the realignment of Kent Avenue and local utilities, “Sandals Boat Yard, located east of the current runway, is to be acquired by the AAJ,” according to a project brief submitted by Environmental Solutions Limited on behalf of MBJ Airports Limited, the operator of Sangster International.

The brief names the owner of the land as Sandals Resorts International.

“The Sandals Boat Yard will be relocated, and the condition of the current site will be assessed and fully decommissioned as necessary, to the satisfaction of NEPA (the National Environment and Planning Agency), as part of the project works,” added the brief uploaded this week to the NEPA’s site.

Neither Sandals nor its CEO and deputy chairman, Adam Stewart, responded to requests for comment on the negotiations up to press time.

The runway project also requires pinching a relatively small parcel of land held by the National Land Agency, NLA, and AAJ is also in talks with the state agency to finalise that acquisition. But that land too appears to be occupied by the Sandals Resorts group.

“In addition to the Sandals Boat Yard, a portion of lands owned by the NLA and currently occupied under a long-term lease by the Bay Roc Group will need to be released for use by the realigned Kent Avenue,” stated the document.

The Sandals Montego Bay resort on Kent Avenue was the first hotel property to be acquired by founder Gordon ‘Butch’ Stewart. The hotel, at the time, was called Bay Roc.

The timeline for the MBJ Airports project spans June 2019 to January 2021, with airfield and runway works projected to begin in September 2019.

MBJ Airports said last year that the project was expected to cost about US$60 million. There was no update on costing in the project document. Financing is expected to come from the Airport Improvement Fund, which is seeded by fees paid by airline passengers.

The extension of the runway to over three kilometres would increase the safety for aircraft while also allowing the Sangster airport to attract heavier-laden aircraft from Europe.

Currently, the runway spans 2.6 kilometres. There are plans to add 408 metres of active runway.

There will be an additional 180 metres of safety zones, or runway end safety area – 90 metres each for Runway 7 and Runway 25 – to bring them into compliance with International Civil Aviation Organization standards, according to the project document.

MBJ Airports has said that the extension would allow the airport to attract fully loaded A330s, 747s and 787s travelling from markets such as Moscow and beyond.

Sangster International is Jamaica’s busiest airport due to its heavy tourist traffic.