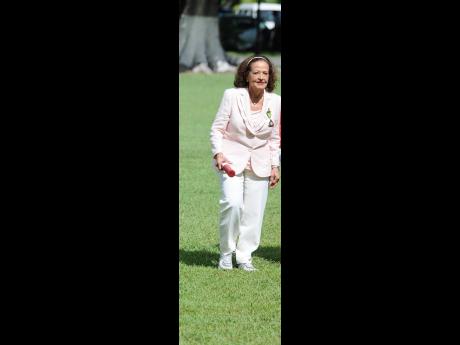 Boutique business hotel Terra Nova is living up to its English translation, ‘new land’, with the breaking of new ground on a luxury condominium complex as the model for a planned redevelopment of the substantial real estate holdings of its owners, the Hussey family.

With planning approvals and loan financing for the previously announced US$25-million project, ‘The Residences of Terra Nova’, matriarch Ruth Hussey, the 81-year-old chairman and managing director of the Hussey businesses, is spearheading the planned transformation of land and business holdings in Jamaica’s two main cities, Kingston and Montego Bay.

Terra Nova Hotel was bought by the Husseys from insurance company Guardian Life in 2001 for US$8 million after operating it for just over a year under a lease with the option to buy.

The hotel was the birthplace of entertainment mogul and investor Chris Blackwell. The suite that his mother occupied was this month named the Blanche Blackwell Suite.

At last valuation a few years ago, Ruth Hussey says the property was valued at well over US$25 million – the result of significant investment in updating, maintenance and improvement.

The Husseys also own and operate five gaming lounges – Monte Carlo on the Terra Nova’s Waterloo Road premises, Treasure Hunt in New Kingston, Vegas Gaming in Liguanea Lane Plaza, Christelle’s Gaming at Manor Park – all in Kingston; and Vegas Gaming in Montego Bay. The businesses also include Liguanea Lane Pharmacy, Discount Pharmacy in Manor Park, the Super Cleaners dry cleaning chain, and the Kingston Ice property in downtown Kingston with its own underground wells, which operates as a bulk water supply business.

“We have been looking at the best ways to develop some of our current real estate investments. There is quite a bit of land that is either not being utilised or is underutilised,” said Christelle Harris, the director of marketing and granddaughter of Ruth Hussey.

Harris and Hussey would not elaborate on the specifics of the planned real estate transformation, noting that the plans were still being discussed within the family business that also encompasses breeding racehorses.

The Terra Nova development is taking place in this its 60th anniversary as a hotel and restaurant, although the original building is much older, having been constructed in 1924.

It also comes eight years after the passing of patriarch Lawrence ‘Laurie’ Hussey, who, with his wife, Ruth, spearheaded the Hussey businesses from fresh fish shops operating at Windward Road, downtown Kingston and Constant Spring Road in the early 1960s.

Ruth Hussey noted that the Residences development is at an “advanced stage of planning” with the developers “following the protocol of submission of the requisite plans”.

With the timelines somewhat delayed by “some structural changes” that are said to have improved the overall plan, construction is now slated to begin in the first quarter of 2020.

The Husseys are also into agriculture, with their Everglades Farms owning and operating the 266-year-old Hampden Estate in Trelawny, a major rum producer. Everglades Farms lost big money on the Long Pong Sugar Factory and cane lands operations, also based in Trelawny, and shuttered that factory during the 2013-2014 crop.

With losses still being counted, the Husseys said they poured well over US$18 million into the bottomless cauldron before laying off workers last December and entering into continuing negotiations for the return of the sugar lands to the Government.

“That’s not money that we had,” Hussey said of the losses, noting that Long Pond put tremendous strain on the other businesses in the group and required substantial additional borrowing over and above the planned initial US$6-million investment. “All the businesses were at stake,” she said.

While still carrying loan payments for Long Pond, the Husseys say the group-wide real estate moves, yet to be fully disclosed, form part of the bid to recover from the sugar losses and strengthen profitability.

“We have restructured the way in which all the businesses in the group operate,” said Harris.

“We are still in transition for some of them and are putting in place new systems to increase our efficiencies and ability to compete. Every business segment in which we are involved is changing …,” she said.

Hussey’s business journey included her once-thriving Ruth Hussey Fashions, which she started in 1967 as a fashion design and clothing factory at East Queen Street in downtown Kingston, where she designed and stitched for leading Jamaicans, including, she said, former Prime Minister Michael Manley.

Terra Nova, with its 47 suites, faces increasing competition from the expanding hotel sector in Kingston, but Hussey says the luxury and charm of her property, which positions itself as an oasis in the city, cannot be easily replicated.

Still, she is looking to up the ante with more service innovations soon to be rolled out at the award-winning property. Last year, Hussey herself was awarded the Order of Distinction for her service to the hospitality industry.

“We believe that it is our sustained focus on the quality of the experience that has made Terra Nova the home away from home for so many of our discerning guests, many of them repeat visitors,” she said.