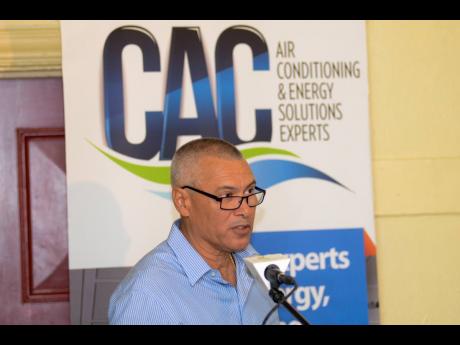 Air conditioning company CAC 2000 Limited reversed course in the second quarter and was back in black, notwithstanding the continued business disruption from ongoing roadworks.

Net profit of $40.76 million for the period ending April completely erased the losses from the January quarter.

“Recall that we were minus $37 million or thereabouts,” said Chairman and CEO Steven Marston.

The reversal was just enough to eke out a profit of $1.09 million over six months. That’s a fraction of the $53.66 million of net earnings in the 2018 period.

CAC 2000 is in the business of supplying and installing air conditioning systems. Marston is attributing the second-quarter turnaround to progress on the collection of outstanding payments for services rendered, as well as money that rolled in from other big jobs.

“It’s just a matter of working on closing out problem jobs, but more importantly, we were able to collect some of the money that was owed to us from Braco that was commissioned in January 2016. That came in the quarter,” he said.

“We also have judgment on a bad debt. What we’re basically doing is working on those historically large accounts receivable that we couldn’t get traction with,” he told the Financial Gleaner.

CAC 2000 has looked to borrowings, a preference share issue, and overseas work as sources of funds for the business at a time when its revenues are being pressured by events external to the company.

CAC 2000’s complex sits in the middle of the construction zone for an overpass at Three Miles in Kingston. Marston says revenues have fallen by a quarter or more since 2017.

“We did very well to be only down 25-30 per cent on revenues. To be honest, it is the work we brought in from Barbuda that saved us,” he said.

The tiny isle, which is a part of Antigua & Barbuda, was devastated in storms in 2017 and is now rebuilding.

“This year, we also have work in Barbuda, and if you take that out of the mix and look at Jamaica … it’s probably about 50-60 per cent,” Marston said in reference to the fall-off in business.

The Jamaican Government had expected to complete the overpass by this month, but Marston says it now looks like the project will continue into August.

He adds that even that date may be too optimistic, and as such CAC is tempering expectations for its third- and fourth-quarter performance.

“I am not overly optimistic. I was hoping initially that we’d be out of the woods with the construction, but this being June [the stated time of completion], they’re evidently not going to finish until Q4, so it still will impact us, causing issues on a day-to-day basis,” Marston said.

He also noted that the PSOJ-led talks regarding compensation for businesses in road construction zones have not borne fruit, with some companies now threatening lawsuits.

CAC, he said, wants consideration from the government that would assist with cash flow.

For example: “When things come in on the wharf, we have to pay 22½ per cent GCT. We need a break. Allow us to pay on the back end rather than up front,” said Marston, explaining that it would negate the need to borrow money to pay GCT, then claim it back two months later. He adds that items for the company have sometimes not been shipped because it was unable to handle the port charges.

CAC has considered two properties for relocating the business away from the construction zone, but opted to ride out the disruptions, the dust and muck, having weighed the costs.

“The truth is that the cost of the properties is so high that the opportunity cost of money would dictate that we do otherwise. We believe that we can stay and probably suffer a while, look for other locations to supplement [storage and operations] and use that money to do other things,” he said.

The company is looking ahead to 2020 for more big jobs and is looking to the Caribbean for opportunities.

CAC is one of four selected bidders for a project in Guyana, and it has put in a bid for a job in Dominica. The company also has a presence in Barbados where it maintains offices.

“It is easier sometimes to get to the islands from Barbados than it is from Jamaica,” said Marston.

“Our philosophy, is it’s better to get a piece of the pie than none at all, so that is why we are constantly exploring these avenues for cooperation,” he added, just before heading off to Barbuda.