JMMB to nominate Duncan and Campbell for Sagicor board 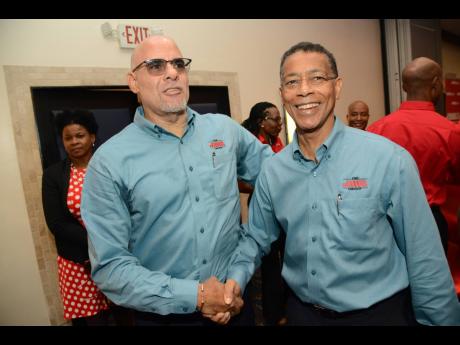 JMMB Group will account for its investment in insurance conglomerate Sagicor Financial Corporation as an associate company and plans to name two directors to the board once the deal is consummated.

“At this time, the two nominees are expected to be Keith Duncan, the JMMB Group CEO, and Archibald Campbell, the chairman of the board of directors of JMMB Group,” said Chief Financial Officer Patrick Ellis.

JMMB Group has 19 subsidiaries spread across its home market of Jamaica and the region, most of which are 100 per cent owned. The main exceptions are four entities in Dominican Republic ranging between 50 and 90 per cent ownership.

JMMB is buying at least 20 per cent of Sagicor Financial through a US$200-million investment in Alignvest Acquisition ll Corporation of Canada. That transaction is pending Alignvest’s closing of the takeover offer for Sagicor Financial. Both the takeover and the JMMB subscription are expected to be completed in the September quarter, Alignvest said in a market filing in Canada.

Sagicor Financial is a leading financial and insurance services provider across the English-speaking Caribbean, with growing presence in the United States. Its operational headquarters is in Barbados.

JMMB Group plans to finance the stake in Alignvest with cash and debt. The Jamaican company holds $30.7 billion in cash as at March 2019, up from $27.8 billion a year earlier. Its total assets amount to $320 billion.