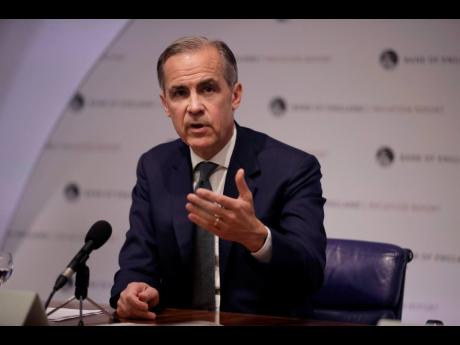 AP
Mark Carney, governor of the Bank of England.

The governor of the Bank of England gave his biggest hint yet that he would back a stimulus package for the British economy if the country crashes out of the European Union at the end of October with no deal.

In testimony to lawmakers on Wednesday, Mark Carney said the response from the bank’s rate-setting panel to a no-deal Brexit will “not be automatic” and will depend on the impacts on demand, supply and on the exchange rate. A fall in the pound, for example, could lead to a rise in inflation that could prompt some rate-setters to want higher rates.

“Some of us, myself included, not all of us, have said that on balance it’s not equally weighted, the outcomes. So it’s more likely that we will provide some stimulus in that event,” Carney said.

For Carney, dealing with the potential of a no-deal Brexit on October 31 – Britain’s revised departure date – will not last long as he’s leaving the bank in January after nearly seven years at the helm. His successor has yet to be announced.

Carney said the risks of a no-deal Brexit have increased in recent weeks and that’s weighing on the economy, particularly on business investment and the housing market.

Under a no-deal scenario, tariffs and other restrictions would be imposed on trade between Britain and the EU. Most economists think that will lead to a deep recession in Britain that would likely prompt the central bank to slash rates and launch another monetary stimulus programme.

However, if Britain secures a Brexit deal, “there would be a requirement for limited and gradual rate increases” to the main interest rate, which stands at 0.75 per cent, Carney said.

The discussion over a no-deal Brexit is at the forefront of the battle for the leadership of the Conservative Party between Boris Johnson and Jeremy Hunt. The winner will become prime minister next month.

Johnson, a former mayor of London, has said Britain will leave on October 31 “do or die”, while Hunt, the current foreign secretary, says it’s an artificial deadline that could be extended again.

Carney warned that opting for a no-deal Brexit just to end the current economic uncertainty will be damaging.

“There’s a reason why in the 40-plus trade deals that have been stuck in the last quarter century between advanced economies that they’ve always had some form of transition from the status quo to the new arrangements,” he said. “I would underscore that whatever arrangement we’re coming to that it is highly desirable to give businesses enough time to adjust to that new reality.”