Five-year payback for Port Royal pier - But what about the crocodiles? 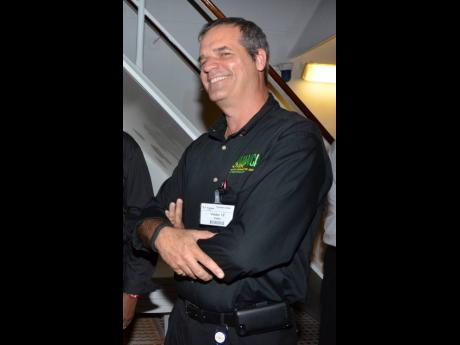 Jamaica can expect the spend from cruise passengers arriving at its fifth and latest port, the Port Royal Pier, to surpass US$40 million within five years, according to William Tatham, the head of cruises at the Port Authority of Jamaica, PAJ.

Concurrently, Tatham downplayed concerns regarding crocodiles in the wetlands of Port Royal, saying the creatures could add to the wildlife appeal.

“It is an attraction. So, in many ways it can be part of the offering,” he said of the crocodiles.

The Port Authority is spending US$40 million to build a floating pier which includes a new terminal and shops.

Tatham reasoned that cruise passengers will spend between US$80 to US$100 per day and that roughly 90 per cent of these passengers will disembark. Half will go on pre-arranged tours within Kingston, and as far as St Ann, while the other half will engage in town walks or taxi outings, he said.

“It will take about five years, because it will take time to build a reputation as a cruise destination,” he said of the likely payback period.

Tatham added that overall the investment will benefit Port Royal and the wider economy over many decades.

“We have responsibility to drive economic growth. When we develop a port we look over 50 years of life,” he said.

The Port Royal port will receive its first ship call In January 2020 from the Marella Discovery 2, with 1,850 passengers aboard.

British and European cruise lines have expressed the most interest in ship calls so far, but an increasing number of US lines are showing interest, Tatham added.

“Yes, we have other cruise lines, but they may not want the market to know at this time,” he said of the US carriers.

Home of the pirates

Tatham said Port Royal can offer an unmatched colonial pirate tourism product when compared with Caribbean countries such as Cayman Islands, whose tourism mascot, incidentally, is a pirate-inspired turtle.

“Pirates were everywhere in the region, but Port Royal was the real home of the pirates of the Caribbean. Tourists are not going to get the fantasy of pirates, but the real story of Calico Jack, Blackbeard and Henry Morgan that inspired these stories,” he said.

The Financial Gleaner awaits a response from the National Environment and Planning Agency on whether it was concerned that the cruise ships calls, over time, may result in crocodiles shifting to new habitats occupied by humans. It comes within the context of an ever-reducing natural habitat for the creatures.

In the planning of the port, surveyors conducted a crocodile assessment in Port Royal and its environs, which found two adult crocodiles.

The environmental impact assessment discussed the crocodile evaluation on three separate occasions, and listed ‘crocodiles’ as a search term 39 times. The crocodiles were detected in the Rosie Hole wetlands, adjacent to Morgan’s Harbour.

Tatham reasoned that crocodiles, while potentially dangerous, can add an element of increased diversity to the region.

“We don’t see them as a problem. We don’t see it as a negative. But we don’t have any hesitation to put up signs in the area,” he said. “We think it can be part of the educational tourism opportunities to highlight the wildlife [of Port Royal], including mangroves and birds.”

The port under development was originally the Old Coal Wharf, where bananas and aggregates were loaded. There was a mandate to construct the cruise port with a small environmental footprint to allow for the protection of the wildlife, and maintaining the archaeological integrity of the ocean floor. Port Royal suffered two major earthquakes over the last 500 years.

“It is our belief that the popularity of Kingston will spread and there will be anchorage of other cruise ships at Kingston Harbour, but Port Royal will always be a single-ship port,” Tatham said.

The environmental report released this month was prepared for the Port Authority by Technological Environmental Management Network Limited.