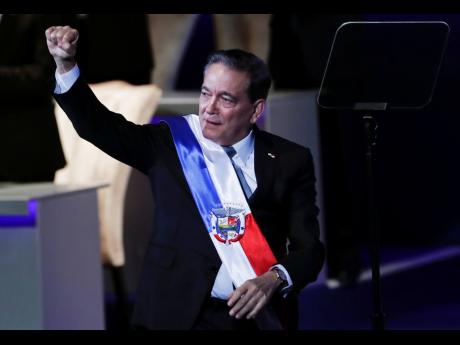 The Associated Press
Panama’s new President Laurentino Cortizo raises his fist after speaking during his inauguration in Panama City, Monday, July 1, 2019. Panama has sworn in for a five-year term the cattleman who inherits a slowing economy and growing frustration among Panamanians about official corruption. (AP Photo/Arnulfo Franco)

Cattleman Laurentino Cortizo was sworn in as Panama’s president Monday, saying he will work during his five-year term to boost the economy and bring transparency in contracting for public works projects.

The 66-year-old won an election two weeks ago that was the tightest in Panama’s recent history, triumphing with only 31 per cent of the vote as the candidate of the Democratic Revolutionary Party.

Cortizo, who succeeds Juan Carlos Varela, said he would stoke the economy by pushing for public-private partnerships for infrastructure projects and also address corruption in government contracting.

“We have monumental challenges,” Cortizo said. “We’re coming off a decade lost to corruption. There’s no place for indifference in the country.”

Noting that some 700,000 of Panama’s four million citizens live in poverty, Cortizo said, “What a tremendous responsibility we have to those who have been left behind.”

Cortizo inherits a slowing economy and growing frustration among Panamanians about official corruption. The economy grew 3.7 per cent last year and unemployment reached six per cent.

The new president said he would create next week a Unit for the Competitiveness of International Services to make sure Panama is the top business services and logistics centre in Latin America.

The presidents of Colombia, Peru, Bolivia and the Dominican Republic and US Commerce Secretary Wilbur Ross were among those at the ceremony. Ross said he had met with Cortizo on Sunday and discussed a desire to grow their economies together.

Cortizo also said he would work to repair Panama’s image as a fiscal haven that has not effectively cooperated in the fight against money laundering.

“This is a new beginning ... (to) rescue Panama,” he said, after being sworn in by the new leader of congress at a Panama City convention centre. “Our country has been disrespected and mistreated ... . It stops here! It stops today!”

Some analysts said the new president will have to focus on an internal clean-up regarding recurring scandals, some of them of international scope, such as a regionwide bribery case involving Brazilian construction giant Odebrecht.

“If Cortizo wants to improve Panama’s international reputation, he will have to attack corruption at home,” said Michael Shifter, president of the Inter-American Dialogue in Washington. “If he has success on that internal front, that will help repair the Panama’s image.”

“We come from a lost decade ... of corruption, of improvisation, of stealing money from Panamanians,” he said, though his party, which was last in power a decade ago, has also been implicated in scandal.