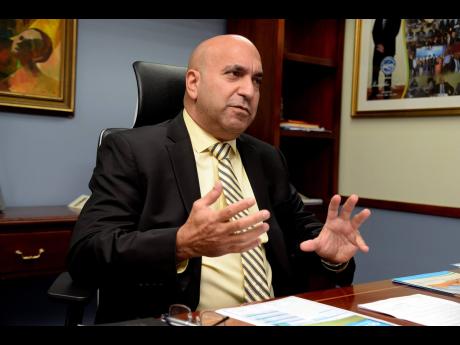 The new and fortified competition in the insurance sector is not too big a worry for market leader Sagicor Life, according to the leadership of the parent company Sagicor Group Jamaica.

In fact, it is the rival operators that should be concerned about how to compete, said President & CEO Christopher Zacca, in a projection of strength at the company’s annual general meeting on Monday.

The insurance market, both the life and general segments, is undergoing fundamental changes with the entry of a new life insurer; and the takeover of regional insurance conglomerate by Jamaican banking conglomerate NCB Financial Group, under which it also becomes a much larger player in insurance in its home market and the Caribbean.

Sagicor Group, through its investment arm, is also growing its operation as the lead partner in a consortium that is acquiring general insurer Advantage General from an NCB subsidiary, and is taking over the insurance business of Scotiabank Jamaica, under a wider regional transaction led by overseas parent operations of the companies.

The Jamaican insurance giant expects increased competition from insurance rival Guardian Holdings Limited, GHL, in which NCB Financial increased its stake to 62 per cent in a takeover in May. The Canopy Insurance joint venture between two powerful partners, GraceKennedy and Musson Jamaica, was announced around the same time.

Still, Zacca ispredicting minimal disruption to the growth of its revenues arising from increased competition in the life insurance market, but company executives declined to provide shareholders with a growth forecast for the remainder of the year.

“I am not going to give a forward-looking statement or a range, but we do not look back, we look forward,” Zacca declared at the meeting.

Zacca has led Sagicor Group for just over two years. The company is currently going through yet another transition at the board level, with the appointment of Peter Melhado from among its ranks as chairman, effective Tuesday July 2. Melhado replaced Richard Byles, who will officially become the next governor of the Bank of Jamaica on August 17.

Sagicor Group Jamaica is on the path to achieving 20 years of profit growth in 2019. It has $783 billion of total assets under management, reflecting growth of 13 per cent year on year.

Zacca said that two years ago Sagicor began preparing for the NCB acquisition of Guardian, with the launch of new products and new efficiency measures to fortify its offerings to the market, including the launch of E-life, a portal through which it sells life insurance online.

“We have not been sitting down waiting on NCB to complete the Guardian transaction. We are forging our way and have taken additional market share and we are confident that we can maintain our dominant position in Jamaica,” Zacca said.

Sagicor claims more than a 60 per cent share of the life insurance market with GHL’s Jamaican subsidiary, Guardian Life Limited, accounting for the bulk of the balance, said Zacca.

The company predicts Canopy will have a minimal effect on its own business, but that Guardian Life, through its Medicus health insurance business, would “immediately lose the Grace and Musson group employees”.

“So initially there is very little impact, but clearly we have to be on our guard. As the dominant player and strongest, we feel that the competition has more to worry about than us,” he said.

Sagicor Group Jamaica will remain a subsidiary of the larger Sagicor Financial Corporation, which is registered in Bermuda but operates from Barbados. Sagicor Financial is being acquired by seven new large shareholders, a transaction led by Alignvest Corporation II of Canada, and includes Jamaica’s JMMB Group which is taking at least a 20 per cent stake in the regional insurer.

“You would have seen our share price in Barbados and Trinidad stock exchanges traded at 50 per cent of book value; so we joined with special purpose acquisition vehicle out of Canada to trade on the Toronto Stock Exchange,” Miller said at the Sagicor Jamaica on Monday.

“There are seven investors who invested in special purpose vehicle. JMMB is one of those investors. Sagicor Group Jamaica remains our subsidiary in Jamaica and that is not intended to change. The transaction will benefit the whole group, including Jamaica,” he said.

The Sagicor Financial transaction is expected to raise US$450 million from investors. JMMB is paying US$200 million for its stake. Miller did not name the seven investors, but Alignvest previously announced deals with two New York-based investors – KGT Investments, known as Highgate; and HG Vora Investments.

Zacca said the decline was due to a one-off revenue rise in the comparative 2017 from the acquisition of new pension business linked to the Red Stripe brewery’s defined benefit plan. Sagicor booked one-time revenue of $6 billion arising from the acquisition.

“So that would not have repeated in 2018. It was a significant one-time event,” Zacca said.

Last year, Sagicor Group made $13.88 billion in net profit, setting a new record. In the March 2019 first quarter, the conglomerate grew revenue by 27 per cent to $20 billion, but its net profit improved at a much slower pace, by two per cent to $2.7 billion.