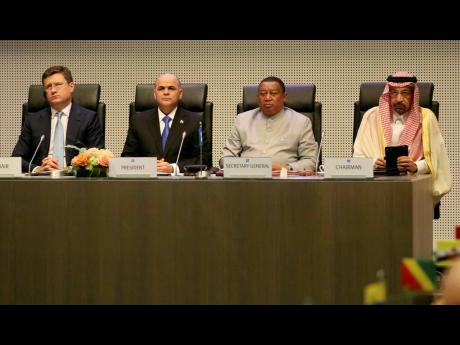 The Associated Press
Russian Minister of Energy Alexander Novak; Venezuela’s Manuel Salvador Quevedo Fernandez, people’s minister of petroleum; Mohammad Sanusi Barkindo, OPEC secretary general of Nigeria; and Khalid Al-Falih, minister of energy, industry and mineral resources for Saudi Arabia, wait for the start of a meeting of the Organization of the Petroleum Exporting Countries, OPEC, and non-OPEC members, at their headquarters in Vienna, Austria on Tuesday.

OPEC members won the support Tuesday of other major oil-producing nations to extend a production cut for another nine months in a bid to shore up prices at a time of waning demand.

Member nations of the Organization of the Petroleum Exporting Countries, OPEC, on Monday agreed to the extension. With strong backing from Russia, the biggest member of the non-OPEC group meeting on Tuesday, the others unanimously approved the proposal.

“In order to help maintain the current stable status of the market and avoid build-up of inventories, we have decided to keep the level and the magnitude of the cuts intact,” Russian Energy Minister Alexander Novak told the forum after the vote.

The 10 non-OPEC nations present at the meeting at OPEC’s headquarters in Vienna also included Mexico, Bahrain, Oman and Kazakhstan. The United States, one of the world’s major oil producers, is not involved in the discussions and won’t be bound by any agreement.

Opening the Tuesday meeting, Novak urged approval of the extension.

“In the current unstable market and the huge uncertainty we are seeing, our coordinated action, aimed at consecutive and stable supply to the market and ensuring its stability, are key to give us longer visibility,” Novak said.

Heading into the meeting, OPEC heavyweight Saudi Arabia said the nine-month extension was the right move to make, given the current market conditions.

“I see demand picking up strongly in the second half of the year and I see compliance greatly improving,” Saudi Arabia’s Energy Minister Khalid Al-Falih told reporters. “And I see the length of this agreement as nine months sufficiently long to bring inventories down and to balance the market.”

The current deal to support prices reduced production by 1.2 million barrels per day, starting from January 1 for six months, and will now run into next year with the extension. Most of the cuts came from OPEC nations, who agreed to reduce 800,000 barrels per day, with the rest of the cuts coming from Russia and other non-OPEC countries, though not from the United States.

The cuts were aimed to put upward pressure on the price of oil and reduce oversupply.

Though tensions between the United States and Iran and attacks on tankers near the Strait of Hormuz have pushed up oil prices in recent days, there are concerns among members that over the longer term demand could weaken due to slower global growth. The International Energy Agency, a group of oil-consuming countries, cut its demand estimate earlier this month.

The price of Brent crude, the international standard, dropped 0.5 per cent Tuesday to US$64.76 a barrel.