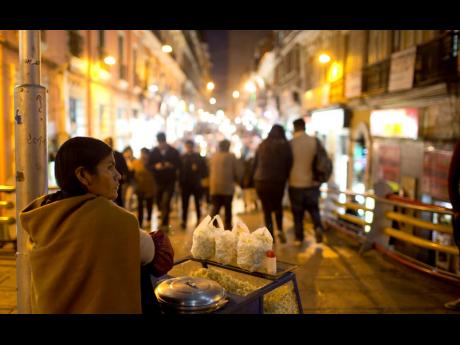 Abraham Rodríguez’s small shoe store grew into a factory that employed more than a dozen workers during an economic boom in Bolivia when prices for the gas and minerals it produces soared.

Today, he can only employ one worker. He says the tax-free import of goods and the black market have affected his sales and have caused him to go into debt.

“My life was better 10 years ago. There were sales and the shoe store grew,” Rodríguez said in his workshop located in La Paz. “Today, the market has reduced. My employees left because I couldn’t afford to pay their salary.”

Surrounded by nations reeling from economic crises, Bolivia remains a rare example of economic stability and growth. And in more than 12 years under President Evo Morales, poverty has dropped steadily in South America’s poorest country, helped by soaring natural gas production. But experts say his economic model is facing mounting challenges, including rising debt, shrinking reserves and devaluing currencies in its main trade partners, and some Bolivians are starting to feel the consequences.

Despite the storm clouds, Morales says he must be returned to power in the October 20 elections as any change would bring chaos. Bolivia’s first indigenous president is one of the few remaining leaders of the wave of leftists who swept into office in South America in past decades.

About 45,000 artisan workshops in Bolivia closed in recent years, according to the Confederation of Micro and Small Enterprises, which estimates an annual loss of more than US$2 billion a year in its sector, or about five per cent of gross domestic product (GDP).

Thousands of artisans and other workers swapped their jobs and turned to commerce because the sale of imported electronics and other goods from China became more profitable. This meant the number of people who joined the informal sector has swelled to about 50 per cent, one of the region’s highest rates.

Big industries are also complaining about a slump in the first months of the year, with the agro-industry taking the biggest hit. And there are less earnings from gas exports and a reduction of the market, said Hugo Siles, an economist of the National Industry Chamber.

Bolivia exports most of its gas to Argentina and Brazil. But its neighbours are facing challenges: Argentines are frustrated by a recession, a sharp depreciation of their currency and spiralling inflation. Brazilian President Jair Bolsonaro had a big election victory last year but is struggling to advance his agenda, and is also coping with a tumbling currency.

“Argentina and Brazil have had strong devaluations, and that made them more competitive in their exports,” Siles said. “Bolivia has had a fixed and stable exchange rate against the dollar for eight years, which means industries that have a high component of domestic input are affected by imports and contraband.”

The fiscal deficit has been rising for six years since the boom in commodity prices ended, and it closed at seven per cent of GDP last year. This, as well as low private investment, a sharp decline in currency reserves, the increase in public debt with still-low international prices, and an economy dependent on commodities, are causing “tensions” in Bolivia’s economic policy, said Juan Pablo Bohoslavsky, the United Nations independent expert on foreign debt and human rights.

“The fixed exchange rate to control inflation leads to an increase in import prices and a growing deficit in the balance of payments,” he said.

Bolivia’s external debt rose in March to US$10 billion, or about 25 per cent of the country’s GDP. But central bank President Pablo Ramos discarded the possibility of a devaluation of the local currency.

“The purchasing power depends on the level of prices. We have low inflation (about 0.6 per cent in 2019),” Ramos told The Associated Press. “This price stability guarantees purchasing power and we must maintain it.”

A few months ago, Morales said the economy was “shielded”, but his economy minister, Luis Arce, recently acknowledged that Brazil’s crisis will affect Bolivia.

Brazil remains Bolivia’s top market for energy, but exports to the region’s largest country have plunged due to lower demand and declining fields. Official reports say that exports fell from a peak of 31 million cubic meters a day of natural gas in 2014 to 23.8 million cubic metres a day in 2017.

Still, the Bolivian government remains optimistic and is betting on continuity. Since Morales took office in 2006, the economy has grown by an annual average of about 4.5 per cent, well above the regional average, and the International Monetary Fund says it will grow at four per cent this year.

Experts, however, warn that growth is largely dependent on savings and external credits from China, while the US$15.1 billion in international reserves, reached in 2014, plunged to US$8 billion last March.

Morales is credited for his pragmatic economic stewardship that spread Bolivia’s natural gas and mineral wealth among the masses, but he has lost support following allegations of manipulating the justice system, corruption scandals, and his insistence in running for a fourth term in office.

Bolivia’s long-governing president warns that if he is not re-elected in October, Bolivia could break with its recent run of stability and return to a past of economic turmoil influenced by the policies of international organisations.

“Before, the World Bank and the International Monetary Fund decided the economic destiny of Bolivia,” Morales recently said on Twitter. “Today, our people decide their own future.”