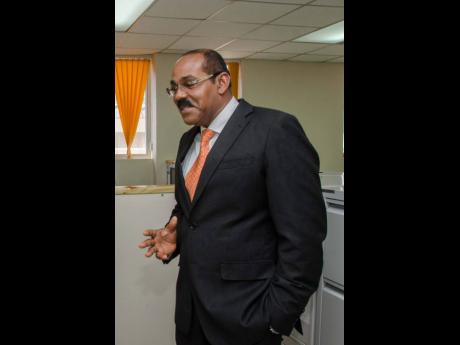 The Antigua & Barbuda government is reporting positive feedback to a proposal that would allow it to own at least 40 per cent of the local Scotiabank operation, under a regional transaction in which the Canadian owner is offloading some of its Caribbean assets to Republic Financial Holdings Limited.

Prime Minister Gaston Browne, speaking on his privately owned radio station, said his administration had put two options on the table for consideration by Republic Financial, a Trinidad-based financial group.

Browne had previously expressed a desire for the bank to be acquired by locals.

“Our first position is that a Antigua & Barbuda consortium comprising the government and a group of domestic banks should be given the first option to buy the Antigua Scotia branch,” he reaffirmed.

“Our second option is to partner with Republic Bank, and in that case we will take up to 40 per cent shares. I can tell you that Republic Bank has indicated a willingness and, in fact, they said to us formally that yes, they will cooperate. They will allow us to get the 40 per cent shares, so we have to look at price,” he added.

Both Antigua and Guyana had initially expressed reservations about the deal.

The deal, valued at US$123 million, includes a US$25-million consideration for the total shareholding of Scotiabank Anguilla Limited, and US$98 million for the other eight operations.

Browne told radio listeners that he held discussions last weekend with the premier of Bermuda, David Burt, who, he said, has indicated a willingness to get involved in the Scotiabank transaction.

“He said to me, ‘I wish if you guys within OECS would go for the purchase of Scotia’. He is quite sure that the pension fund in Bermuda would be happy to have a significant stake in the bank in the Caribbean,” Browne said.

But, he added, “for some reason within the OECS, we have not been able to get a consensus on the issue. So far, to my knowledge, it would appear that all of the other leaders have agreed to the Republic Bank deal. We have no difficulty with their decision. I mean, they have the right so to do, but I see a great opportunity for the OECS countries to step up and to take control of those Scotiabank branches”.

Caribbean countries have been arguing that the threat by banks in developed countries to withdraw correspondent banking services would exclude the region from the global finance and trading system, with grave consequences for the maintenance of financial stability, economic growth, remittance flows and poverty alleviation.

He also urged the region to consider purchasing the Scotiabank operations, saying they would likely need to invest US$98 million for the operations, but would acquire “perhaps about US$3 billion in assets”.

“I thought that was an excellent opportunity for the region, which would have helped us to have one major bank that would have branches in the diaspora to provide banking services to Caribbean people in the diaspora,” Browne said.