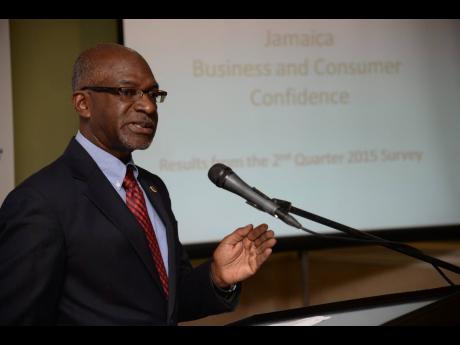 Business confidence dipped in the second quarter of 2019, the first time since the corresponding period last year, largely because expectations about their level of financial performance did not materialise.

However, consumer confidence strengthened further, fuelled by their expectations about jobs and views of government initiatives, infrastructural development and evidence of growth in sectors such as tourism and business process outsourcing.

“Perhaps more noticeably and of concern are the reading of some of the variables that comprise the index. One of the key factors was the level of expected profitability. A significant number of firms indicated that profits were less than what they expected,” said Don Anderson, managing director of Market Research Services, in presenting the findings of the survey in New Kingston on Tuesday.

The proportion of firms with profits exceeding expectations was 19 per cent in the second quarter of 2019, representing no change from the previous quarter. Just over half, 55 per cent, of firms indicated that profits were as expected but considerably less than the 62 per cent in the first quarter, while 25 per cent reported that profits were worse than expected, five per cent more businesses than did so in the January to March quarter of 2019.

Firms willing to invest in new plants and equipment declined from 159 points, the highest ever recorded in the surveys, to 142 points in the second quarter of 2019, according to the study conducted on behalf of the Jamaica Conference Board, the research arm of the Jamaica Chamber of Commerce.

Twenty-five per cent of firms indicated that it is not a good time to invest, up from 19 per cent in the first quarter.

“The majority of firms reported that they were not on track to achieve their goals this year,” Anderson said. “Key determinants of this view were the level of crime, as well as fluctuations in the foreign-exchange rate, which makes it difficult for them to make long-term plans.”

The consumer confidence index was 183.4 points, compared with 177.5 in the first quarter of 2019. Consumers’ assessment of current economic conditions grew to 228.6 points, up from 208.3 in the first quarter, while their expectations for the future grew from 167.2 points to 170.3.

The proportion of consumers who assessed business conditions as good was 26 per cent, while 44 per cent anticipate those conditions to get better over the next 12 months.

Their job outlook also grew, from 122 to 127 index points. “Consumers are strongly of the view that more jobs are available and are being created and are also encouraged by the opening of new businesses and the perception of changes they see being implemented to influence growth,” said the survey report.

“It is interesting, then, that against this positive outlook, consumers do not appear overly excited about their spending plans and there is no strong positive move to either take a vacation, buy a motor car, or buy a house,” Anderson said.

“So this might seem to be counter-intuitive and probably not consistent with what they expect. But one of the reasons for this ... is that consumers also expect that prices will rise and, to a large extent, would serve to offset the gains realised for a better-performing economy,” he added.

A majority of consumers, 77 per cent, said they expect to be able to afford back-to-school expenses for their children despite a slight fall-off in the number of persons receiving remittances that help to meet the expenses of households across Jamaica on a day-to-day basis, said the researcher.