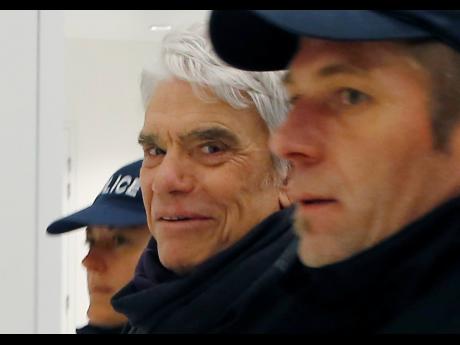 A Paris court has acquitted the flamboyant French tycoon Bernard Tapie of fraud over a payment of €404 million, or US$452.5 million at the current exchange rate, linked to the sale of German sportswear company Adidas in the 1990s.

Tapie, who has been battling cancer for years, was not present for Tuesday’s verdict. He had previously suspended treatments to fight the accusations, which could have seen him face five years in prison.

“My cancer just got a dirty kick in the face,” Tapie told the regional La Provence newspaper, of which he is majority shareholder.

Tapie, a former urban affairs minister who also once owned the Marseille soccer team, had sued French bank Credit Lyonnais for its handling of the sale of his majority stake in Adidas in the mid-1990s. A private arbitration panel ruled in 2008 that he should get compensation, including interest.

The payout to Tapie came from state funds, prompting public indignation and questions about whether he benefited from political connections, including with then President Nicolas Sarkozy.

Despite being vindicated, Tapie still faces a demand to reimburse the funds. The case decided upon on Tuesday only dealt with the charges of fraud and the misappropriation of public funds.

The court rejected the prosecution’s claim that arbitrating to end a long-standing dispute over the payment by Credit Lyonnais, then partly owned by the state, was behind the alleged fraud.

“It was always considered that a ... financial risk for the state existed, a de facto admission that Bernard Tapie could expect to be compensated,” the ruling said.

The court noted that arbitration is “fully legal ... is not contrary to the interests of the state, and was accepted by public authorities”.

It’s not the first time a French court has made a judgment over the case. In 2016, a special court convicted then Finance Minister Christine Lagarde of negligence in her management of the arbitration, but did not level any punishment and spared her a criminal record.

Lagarde, the International Monetary Fund chief, has just been named to head the European Central Bank. She was not part of the trial, but her top aide at the time, Stephane Richard, was among those accused. His acquittal on Tuesday means that he retains his job as head of French telecoms company Orange.

The court also acquitted Tapie’s lawyer at the time, Maurice Lantourne, and others involved in the arbitration deal.

The prosecution has not said whether it would appeal, but has 10 days to do so.