Branson: Pound could fall to a dollar in no-deal Brexit 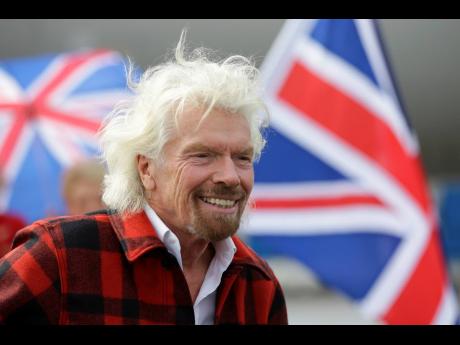 Virgin Group founder Richard Branson has warned that the pound’s value would fall to that of the dollar if Britain leaves the European Union (EU) without a deal – a stark prediction that will fuel worries about the economic pressures facing the country.

Traders see the possibility of a no-deal Brexit increasing because Boris Johnson, the front-runner in the Conservative Party contest to replace Prime Minister Theresa May, refuses to rule it out.

After being granted two extensions to its original March 29 departure date, Britain is now due to leave the EU on October 31. Johnson has said that as prime minister, he would see that it does, come what may.

Branson told the BBC in an interview broadcast Thursday that his companies would be forced to shift investment away from Britain if the country leaves the EU without a divorce agreement because many of their costs are in dollars.

“The pound was at US$1.53 when the referendum took place. The pound today is at US$1.22, US$1.23, and the pound will collapse to parity with the dollar if there is a hard Brexit,” Branson said.

Parity between the currencies has never happened, so his prediction about a further weakening in the pound – it’s also struggling near a historic low against the euro – is likely to sound alarm bells in the United Kingdom (UK), especially as many of the British are getting ready for summer holidays.

Branson’s warnings came as the Bank of England said the risks of the UK crashing out of the European Union without a deal had increased since the start of the year.

Most economists think the British economy would sink into a deep recession in that scenario, as tariffs are slapped on exported goods and other dislocations and disruptions are imposed on trade.

The bank said in November that a no-deal Brexit could cause the British economy to shrink by around eight per cent in a matter of months – though contingency measures put in place since then may lessen the blow.

The British economy is already being burdened by uncertainty over Brexit, largely because firms are holding back any investment plans because they have no idea what the country’s future trading relationship with its main export market will be. Growth in the second quarter is set to be flat, and could potentially be negative, stoking fears that the British economy could actually be officially in recession when the Brexit deadline arrives.

The Bank of England’s Financial Policy Committee, which assesses financial risks to the economy, said Thursday that the British financial system is resilient enough to cope with even what it considers to be the “worst-case disorderly” Brexit. But even then its optimism was measured.

“Actions by businesses and authorities since November have resulted in some improvement in the preparedness of the UK economy for a no-deal Brexit,” the committee said. “However, material risks of economic disruption remain.”

The pound has taken the brunt of concerns about the UK withdrawing without a deal, falling earlier this week to near two-year lows above US$1.24 as Johnson pushed his line that, “do or die”, Britain will leave the EU on October 31.

A majority of lawmakers appear opposed to such a path, but there are concerns in the markets that Johnson, dependent on the votes of uncompromising Brexit supporters, may look to suspend Parliament to push a no-deal Brexit through or may instead call an early general election.

While the recent slide in the pound shows that the markets have already factored in a Johnson victory, there may be further turbulence ahead for the currency, said Michael Kitson, an economist at the Cambridge Judge Business School. It’s not just the question of Brexit, but also the prospect of who Johnson will bring with him in government.

“First, the markets are wary about the prospects of a no-deal Brexit; second, there are concerns about Boris Johnson’s incoherent ramblings on economic policy,” Kitson told The Associated Press. “Third, there will be scrutiny of the first Johnson Cabinet (and especially who he appoints as chancellor) to see if there is some trace of economic competence amongst the zealous Brexiteers who are likely to get the top jobs.”

The prospect of a no-deal departure is a burden for companies like Branson’s Virgin Atlantic because they won’t be able to make plans to smooth the transition.

“All our costs are in dollars,” Branson told the BBC. “Maintenance, plane costs, pretty well every cost is in dollars. And therefore, the bottom line hit of that was ₤100 million a year, say.”