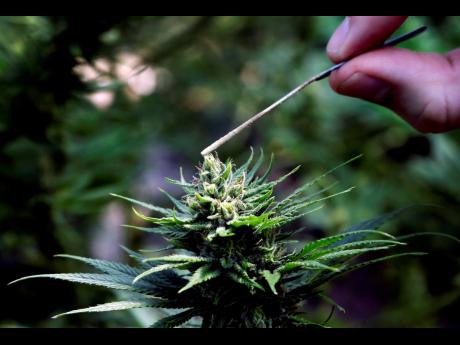 Nick Tennant spent eight months hunched over his dining room table learning how to assemble steel parts into a machine he saw as the future of the marijuana industry.

It’s been seven years, and Tennant is still making equipment modelled after that first prototype. But the founder and chief technology officer of Precision Extraction Solutions has since swapped his dining room for a swanky office and a large warehouse nearly overflowing with wooden crates containing customer orders, the Detroit Free Press reported.

Tennant and his business partner, Marc Beginin, co-founder and chief executive officer, own the Troy-based business that they say “shot out like a cannon” in 2014 to become an international leader in a niche corner of the ever-evolving and rapidly growing marijuana industry.

It sold more than US$1 million in equipment in the first 90 days of business, Beginin said, and now hits that number in equipment sales every week to the industry’s top brands.

“We didn’t really know, you know?” Tennant said. “We were just two guys, we were like ‘OK, we’re going to try this out.’ And then all of a sudden it just ... “ he says, while motioning upwards like a plane taking off.

The company manufactures equipment that extracts compounds called CBD, or cannabidiol, and THC, tetrahydrocannabinol, from hemp and marijuana into oil that can then be processed into a variety of consumable products thought to have health benefits.

“We don’t touch the leaf,” Beginin said. “So if this was the gold rush, we would be selling the picks and shovels.”

In a way, it is like the gold rush: a new frontier flush with possibility and high profits beset by a kind of a Wild West feeling of uncertainty and regulatory confusion.

The federal government legalised hemp in the 2018 Farm Bill, and since, products including lotions and tinctures made from hemp extracts are flooding the mainstream market on shelves of stores like Walgreens and CVS, while farmers gear up to grow more of the multipurpose crop.

Kroger announced in June it would begin selling CBD-infused topicals at stores in several states, including 92 in Michigan.

It’s the trend Tennant predicted. When he first jumped into business, extraction products made up about 30 per cent of the market, he said. That number has since more than doubled to 60-70 per cent.

“I saw the trend starting to go towards extracts,” Tenant said. “And I just thought that it was the future of everything.”

Marijuana and hemp are two kinds of cannabis plant, each containing more than 80 chemical compounds. THC is the compound in marijuana that makes a user feel high. It is found in trace amounts, less than 0.3 per cent, in hemp.

CBD lacks the psychoactive effects but is thought to have numerous health benefits. Several studies show CBD could be used to treat chronic pain, epilepsy, anxiety, depression and other disorders.

People in Michigan can buy CBD oil without a medical marijuana licence. A state law passed in December 2018 said CBD and other hemp products are not regulated like medical marijuana because they contain little to none of the psychoactive chemical THC.

Despite his blue-eyed, blond-haired, youthful looks, Tennant is not a new face in the industry. Before Precision, Tennant and Beginin, an attorney, owned a private consulting firm that advised marijuana growers and dispensaries.

At 24, he landed on the front page of The New York Times after founding Med Grow Cannabis College, which specialised in schooling people about marijuana at a time before anyone had heard of CBD oil, much less seen it at CVS. Few sources in the stories that splashed across national media outlets would even reveal their names.

The 33-year-old attributes his past endeavours to an expert-level knowledge of the complexities of the plant and the industry.

His company is certainly a far cry from the taboo classroom setting. The single-storey black brick building blends in with the surrounding, nondescript businesses. But inside, a team huddles around a conference table in a room that is the picture of modern tech: glass office walls, gray hardwood floors, whiteboards and doughnuts in the break room.

Precision has 50 employees, from engineers to project managers to architects, and boasts more than a dozen open job postings. Some new hires are relocating from places like Chicago and California. The new chief financial officer is a former Microsoft executive out of Seattle, Beginin said.

In the warehouse, which has a production line straight out of a Henry Ford plant, Tennant stands beside a newly assembled X10 extraction machine.

The steel contraption is made up of connected pressurised, temperature-controlled vessels. The marijuana plant is soaked in a solution, usually ethanol or butane, which works to extract the desired compound from the plant like a “lock and key,” Tennant said.

Precision is unique because it is not solely an equipment manufacturer. The business provides consultant services, architectural lab design, training and postproduction support in order to walk its customers from “dirt to a finished product”. It helps customers navigate the complicated set of regulatory codes that differ per city, state and country.

In an industry with a steady stream of newcomers hoping to carve out a chunk of the market, this hand-holding is valued, and has, in part, contributed to the company’s success.

“We have a unique, competitive advantage because not only are we an equipment manufacturer, but we’re the people that stand by you, help you run the equipment, standardise it, integrate it, make sure that it’s right for your process,” Tennant said. “Because the technical process is varied and it’s complex.”

Precision has more than 1,000 installations around the world, including in South America and Europe.

In February, Precision was named the sole equipment supplier for a facility in Sicily, run by Canapar, a company associated with Canopy Growth Company, recognised as the largest marijuana company in the world.

“We chose Precision as our extraction technology partner because they are the most recognised and innovative extraction equipment company in the world,” Canapar’s CEO said in a news release after the announcement.

Precision is a company built on forward thinking, and it’s still doing exactly that.

Beginin said Precision is considering an initial public offering soon. Neither of the company’s leaders see the industry, or business, slowing down any time soon.