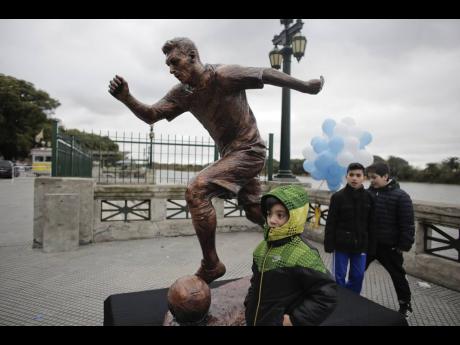 AP
In this street scene in Buenos Aires, Argentina, children stand by the statue of soccer star Lionel Messi. Fears that Argentina was headed for hyperinflation have receded.

The information was a quick snapshot of countries that do not dominate the regional headlines, such as Costa Rica, El Salvador, Jamaica, Bolivia, the Dominican Republic, Guatemala, Paraguay and Honduras.

The report garnered a great deal of attention on the strong ratings and impressive economic indicators of many of the smaller countries. For example, within the ‘BB’ ratings universe, Bolivia has a debt-to-GDP ratio of 36 per cent. Meanwhile, Paraguay has a debt load of only 19 per cent.

The report became very useful because there has been a great deal of interest in sovereign credit during the past year. The reversal in direction by the monetary authorities across the planet has forced investors to look for yield in alternate locations. Not only have the US Federal Reserve and the European Central Bank relaxed their monetary positions, the Reserve Bank of Australia and the Central Bank of India have also cut interest rates.

Faced with such an environment, but still needing to generate yields to meet their obligations, asset managers, such as pension funds, insurance companies and university endowments, have been rushing into the sovereign bond market. New issuers, such as Uzbekistan, have used the opportunity to break into the marketplace, launching inaugural debentures. However, there is a dearth of information on many of these countries. Most of the research is concentrated in a handful of sovereign names. This is the reason why we decided to launch the sovereign strategy report.

Building on the success of the report, we decided to create a model portfolio to track its performance. We expanded the portfolio to include non-Latin American sovereign names, such as Turkey and Ukraine, and we will eventually expand it to include MENA (Middle East) and African countries.

The initial problem we encountered was that the presence of Brazil (BB) and Argentina (B) greatly distorted the portfolio.

Typically, portfolios are constructed using the weighted average of the instruments from the issuing countries or companies. It is a very useful approach because it allows the performance of the portfolio to track price changes in individual bonds. The problem is that some countries, such as Argentina and Brazil, are asymmetrically large, with huge debt stocks, and they dwarf the smaller issuers, such as Paraguay and Bolivia.

The purpose of the portfolio was to diversify across a range of issuers in order to provide greater stability to the returns. Therefore, we decided to cap the very large issuers to only 12.5 per cent of the total portfolio. The countries that were capped at 12.5 per cent were Argentina, Brazil, the Dominican Republic, Ecuador, Turkey and Ukraine. Although it still provided a great deal of concentration in a half-dozen sovereign names, it provided an opportunity for some of the smaller issuers to have a more meaningful impact on the returns.

The portfolio performance during the first month was very interesting. It was up 5.87 per cent during the month of June, and the accumulated return for the first half of the year was 12.87 per cent. Although the portfolio reflected the strong performance of all sovereign credits, it also highlighted the impressive rally in Argentine assets.

Argentina was up 11.6 per cent during the month, reversing the appalling performance of the year. There were several reasons for the reversal.

First, the inflationary surge reversed its course and consumer price increases have been trending down. This eliminated the worries that the country was headed for hyperinflation.

The third reason was the political shift towards the centre in the upcoming presidential elections. The selection of Alberto Fernandez for the Kirchner ticket signalled a move away from the radical leftist policies that were a hallmark of the previous administration. Likewise, the incorporation of Miguel Angel Pichetto as the vice-presidential candidate signalled a national reconciliation ticket. These changes suggested that there was a move away from the polarisation that divided Argentine society for the past four years.

Next on the list was Ukraine. Its bond prices rallied 8.4 per cent. The improving economy and the election of Volodymyr Zelensky gave investors a great deal of confidence to increase their exposure. Turkey was up 7.06 per cent, due to the election results in Istanbul, and Costa Rica was up 6.6 per cent, due to better economic numbers.

n Dr Walter T. Molano is a managing partner and the head of research at BCP Securities LLC.wmolano@bcpsecurities.com