China imports from US plunge amid tariff war 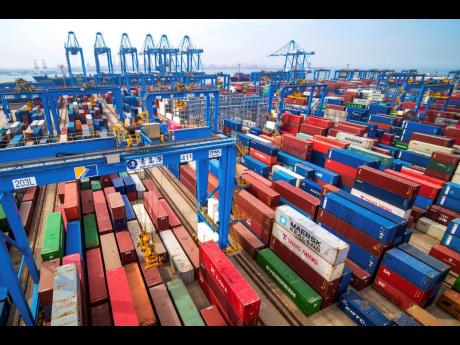 AP
In this Tuesday, May 14, 2019 photo, containers are piled up at a port in Qingdao in east China’s Shandong province.

China’s trade with the United States plunged last month as a tariff war battered exporters on both sides of the Pacific Ocean.

And there’s no let-up in sight: Tensions between the world’s two biggest economies continue to simmer even though President Donald Trump and his Chinese counterpart, Xi Jinping, called a ceasefire two weeks ago.

Data out Friday showed that the hostilities are taking a toll.

Chinese imports of US goods fell 31.4 per cent from a year earlier to US$9.4 billion, while exports to the American market declined 7.8 per cent to US$39.3 billion, according to Chinese customs data. China’s trade surplus with the United States widened by 3 per cent to US$29.9 billion.

The two countries are fighting over US allegations that China deploys predatory tactics – including stealing trade secrets and forcing foreign firms to hand over technology – in a headlong drive to challenge American technological dominance.

The US has imposed tariffs on US$250 billion in Chinese imports, drawing retaliatory sanctions from Beijing on US$110 billion in US products. China also directed importers to find non-US suppliers.

The dispute won’t be easy to solve. Mistrust between Washington and Beijing runs high. And a substantive solution likely would require China to scale back its ambitions to become a world leader in advanced technologies such as artificial intelligence and electric cars.

Envoys talked by phone on Tuesday in their first contact since Trump and Xi met last month in Japan, the Chinese Commerce Ministry said. It gave no details or a date for more contacts.

“Our base case remains that trade talks will break down again before long,” said Julian Evans-Pritchard of Capital Economics in a report.