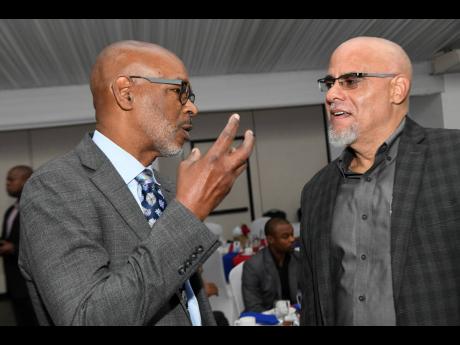 David Marston, a global economic and risk management expert, is making the case that local lenders and financiers are too narrowly focused on the types of assets they are willing to back, saying they should be looking beyond their comfort zone to sectors such as the creative market for opportunities.

Marston, who was keynote speaker at the Private Sector Organisation of Jamaica/JMMB Group annual economic forum on Tuesday, said he wanted to change the narrative on financial inclusion, which is normally looked at as a social benefit.

Instead, he noted, support of the small and medium-sized entities sector should be seen as an opportunity to diversify and bring other sectors into the mainstream.

“As a financial industry, we are all exposed to more or less the same assets – government assets and a few corporates. The whole system is chasing a few assets. That’s the status quo,” he said, adding that a 2018 World Bank assessment of local financial institutions showed a need for them to diversify their portfolio.

Marston is chairman of the Financial Deepening Implementation Group Jamaica and a founder and senior managing director at Monymusk Advisory. He was director for risk management at the International Monetary Fund, a position from which he has retired, and in 2018 he worked as an enterprise risk management adviser to the central bank of Georgia in the United States.

The economist told the forum that financial inclusion should be approached not only from the point of view of provision of loans, but also leveraging neglected assets, such as music and culture.

“Brand Jamaica is largely produced by those who are excluded from finance,” said Marston, who asserted that Jamaica’s global brand recognition came from reggae music, a segment which was consistently underfunded.

“There are 140 reggae festivals in 46 countries between June and November 2019. That is how invasive that brand is,” he said, adding: “There may be no one brand of that magnitude, globally.”

Marston said the domestic supply chain linked to the monetising of reggae is largely self-financed, in spite of the brand’s international dominance.

Comparatively, he noted that in New Orleans in the United States, the entire economy of the French Quarter was organised around jazz music, while the economy of Nashvillle, Tennessee, was geared towards music and culture, whereas the international deference for Trench Town as the home of reggae appeared to be underappreciated locally.

“I go to Slovenia and people want to talk to me because I am a Jamaican,” he declared.

The economist said there are ways of raising funding to tap the cultural asset, noting that in November 2018, Columbia launched the first orange bond, the purpose of which was to build cultural infrastructure, create venues, and build fibre optics and other related projects. On auction day, 320 investors applied for the bond, which raised US$160 million and was oversubscribed.

He noted that the concept of inclusion emerged from World Bank studies in the early 2000s when the connection between poverty and access to finance was noted in research. Subsequently, it became mainstream in economic thinking and planning.

“For me, then, the paradigm of inclusion is fundamental to any modern economy,” said Marston. “An irony for Jamaica is that the brand that Jamaica has globally, has been created by those who are financially disadvantaged.”

Marston said Jamaica has one of the highest proportions of bank or savings accounts in Latin America and the Caribbean, but that those savers are not borrowing.

“Solving that social equity issue would be a good motivation for financial institutions,” the economist said.