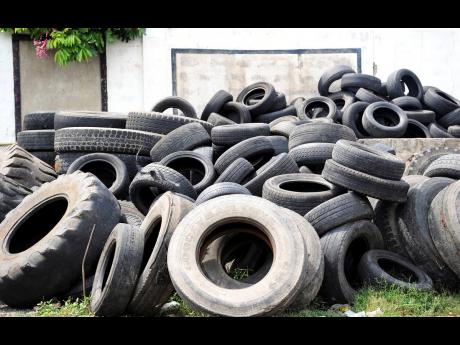 Caribbean Cement Company plans to spend US$9 million ($1.2 billion) on capital projects this year, one of which involves converting old tyres from waste to energy at its kiln.

The cement company has 35 projects planned for this financial year. The tyre project was pitched by outgoing General Manager Peter Donkersloot Ponce not as a money-making venture, but one meant to make a positive contribution to the environment.

“We will be able to eliminate the tyres in Kingston, probably in four years,” said Donkersloot Ponce at the company’s annual general meeting on Thursday.

The cement maker, which is ultimately owned by construction giant Cemex of Mexico, said more details would be revealed this week following the signing of a memorandum of understanding with the Jamaican Government.

“It is going to replace some of my fuel, and therefore reduce my fuel cost, but elevate my maintenance cost. So, virtually, I am not making money, but I am solving an issue and breaking even,” said Donkersloot Ponce. “It is part of our corporate social responsibility.”

The company has invested more than US$500,000 so far to allow its facility to accommodate old tyres.

Over three years, Caribbean Cement’s capital expenditure budget is estimated at $2.9 billion. Over the short term, the company plans to put aside $2.6 billion to have cash available for “strategic investments” or acquisitions.

Of its many projects this year, the latest was a $69 million investment in a palletiser robot, that is, a machine that moves bagged cement on to pallets in rapid succession. The palletiser was commissioned this month.

Most of its investments are aimed at increasing its output in a widening market, which demands more cement. The company expects to produce 1.2 million tonnes of cement by December 2020 or about one-third higher than its current annual production of about 950,000 tonnes.

But Caribbean Cement will also spend $60 million over 10 years to refurbish the Rockfort Mineral Bath to transform it into a world attraction.

Donkersloot Ponce became general manager at Caribbean Cement in 2016 and demits office this month. Over that period, he oversaw the buy-back of manufacturing assets that it leased. That buy-back of leased assets became pivotal in reducing costs and leading to higher profits over the last two years.

“Last year, we performed better than the last 20 years put together,” he told shareholders, explaining that in 2014, accumulated losses totalled some $7.3 billion but were reduced to roughly $1 billion in 2018.

“Now, this year, we have cleared all the accumulated losses of the company. So we cleared that negative to zero,” he said.

Donkersloot Ponce plans to go back to his home in Panama and spend time with family. It ends speculation that he would be redeployed within the Cemex group.

“It has been three good years, but it has taken a toll on my family – and I am a family person,” he said. “We have achieved a lot of things at Carib Cement, but you have to realise the sacrifice that comes with that, and I have decided to take some time for my family,” he added.