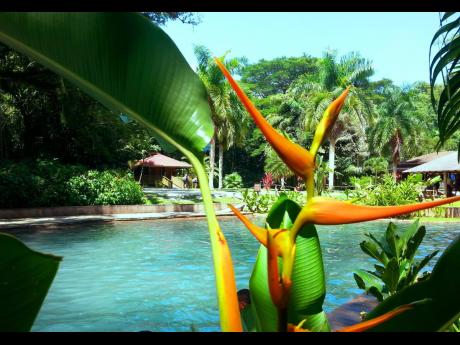 Plants in bloom at YS Falls in St Elizabeth. The YS corridor is one of six components of a plan to transform Black River into an ecotourism attraction.

National Environment & Planning Agency, NEPA, has earmarked an initial $25 million for the proposed Black River Protected Landscape, a project which seeks to conserve the biological diversity of the area for tourism, educational and cultural purposes.

The Black River Morass is an internationally recognised wetland and is a Ramsar site – designated to be of international importance – but does not enjoy the protection of local legislation.

While the start-up budget will run to $25 million, the average annual expenditure for the protected landscape is estimated at $45 million, plus another $15 million for river cleaning.

Aside from a strong emphasis on the facilitation of sustainable livelihoods, development and job creation, NEPA has put forward plans to use the protected area to drive up revenue in the tourism sector through hiking, biking, river-based tours in addition to a suggestion of horse racing in Fullerswood, St Elizabeth.

“Horse racing was introduced to Jamaica first in Black River,” NEPA said in its report titled ‘Strengthening the Operational and Financial Sustainability of the National Protected Area System Project’.

The government agency outlined as part of its objectives plans to facilitate the development of a diverse tourism industry while protecting the environment by fostering a desirable ecological balance in all areas. At the same time, NEPA wants to make provisions for the incorporation of small and large-scale support services through the development of non-traditional tourism products.

Since the 1990s, Black River has been used for safari boat tours to take visitors up the river through the Salt Spring into the Broad River.

“They were initially conducted only in large, motorised canoes but in recent years, the size and comfort level of the boats have been increased by the tour operators to motorised pontoons capable of holding 10 to 40 passengers, depending on the size of the vessel,” NEPA said.

“Most of these tours are between an hour to an hour and a half and do not go as far as the Salt Spring Bridge or further upriver to Cheese Rock.”

The report noted that recreational and tourism activities have been increasing in the parish, as indicated by the recent introduction of a fourth tour operator, BREDS from Treasure Beach, which uses canoes with outboard engines and takes visitors from Treasure Beach along the coast to Black River and then upriver.

Studies undertaken by NEPA indicate that the safari tour operators welcome most of their visitors during weekdays particularly between October and March. Roughly five per cent are said to be Jamaican based on the 29 visitors polled by the government agency.

“The respondents were generally happy with their experience although 21 per cent who considered themselves naturists pointed out the need for water and garbage bins on their boats and wanted the opportunity to explore within the morass itself,” NEPA noted.

In addition to the river tours, both tourists and locals would visit other attractions, including Apple Valley Farm in Maggotty, Bubbling Spring in Middle Quarters, YS Falls and Cashew Park.

NEPA estimates that an average of 1,445 visitors on boat tours over a three-day period at a cost of US$19 per tour for foreign visitors and $2,300 for residents, would result in gross income of more than US$1.3 million ($159 million) per year.