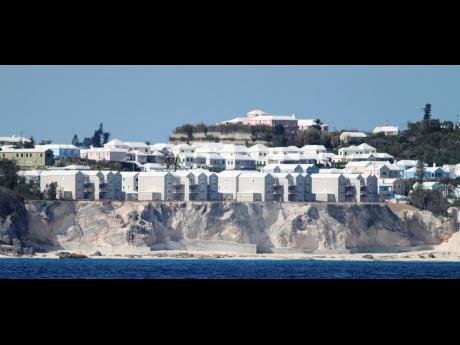 A shoreline view of the Grand Atlantic housing development in Bermuda.

The Bermuda government says it will turn a failed affordable housing development into a hotel and condominium complex on the island’s south shore.

Public Works Minister David Burch said the new venture will be called the Bermudiana Beach Resort. It was previously known as the Grand Atlantic, but few of the units sold and Burch said it was the victim of “sabotage”.

The minister, who is a former commanding officer of the Royal Bermuda Regiment, claimed the housing scheme failed because campaigners wanted to keep black people off the south shore.

“Black people are not supposed to have beach access on South Shore Road. That’s the bottom line. And so you have all of these people railing against housing development that would have provided that access to black people in this country,” he charged.

“The fact that it failed was a direct result of sabotage by certain people, and I think that we have refashioned this,” said Burch, whose comment came after a ribbon-cutting ceremony to relaunch the site as a hotel and condominium complex.

Campaigners against the complex argued that erosion could pose a risk to the development and that work needed to be done to shore up the nearby cliffs.

The resort, created from the former apartment blocks and scheduled to open in July next year, will have access to the marketing and reservations system of global hotel chain Hilton, as a result of a deal struck with the developers.

A total of 71 of the 78 condominiums are being refurbished with new kitchens and bathrooms, additional windows and new floor coverings. The other seven condos will be converted into a reception area, bar, restaurant, meeting room, commercial kitchen, spa and operations support areas.

Elevators will also to be installed in eight of the nine condominium blocks and two swimming pools will be built.

Grand Atlantic was launched by the Progressive Labour Party government in 2011 as a hotel and affordable housing development. The scheme was branded a failure with only two of the 78 condo homes being sold, while the hotel was never built.

The One Bermuda Alliance party, which led the government between 2012 and 2017, confirmed in April 2014 that it had signed a contract with MacLellan & Associates, a Caribbean-based tourism and leisure firm headed by Robert MacLellan, to “upgrade and reposition” the complex as a holiday destination.

A memorandum of understanding was signed with the One Bermuda Alliance government. The deal initially fell through because of problems in securing financing, but was later revived.

Burch said that MacLellan & Associates was now hiring Bermudians to staff the resort.

“The hotel developer, Mr MacLellan, has a track record of hiring local people throughout all of his properties in the Caribbean,” he said.