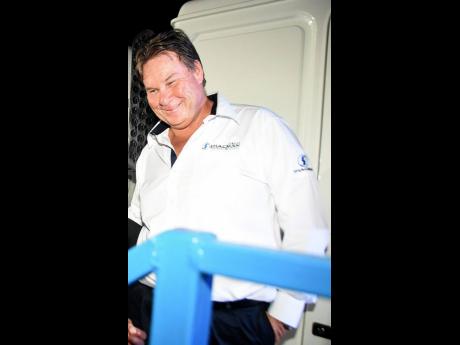 Tank-Weld Equipment has added three brands to its dealership, further marking its transition from the business of equipment rental to supplier.

Concurrent with the shift, the company has been redeploying staff to focus on the new core.

“Tank-Weld Equipment used to be involved in construction. We’ve actually slowed down with that and what we’ve done is to move the personnel into the dealership,” said Managing Director John Ralston.

Eighteen months ago, Tank-Weld launched its truck dealership as exclusive distributor for the Shacman line of medium, heavy and super duty trucks. Its aim at start up was to sell 50-100 trucks in year one, but ended up outperforming that target with more than 400 units sold, according to Ralston.

Buoyed by those numbers, Tank-Weld has expanded its range of trucks to include the T-King light trucks, at starting prices of $3 million, which will be showcased this Friday; and is also now selling earth-moving equipment. The market for heavy and earth-moving equipment in Jamaica is dominated by names such as Caterpillar and Komatsu, while Euclid is the brand of choice for super-duty equipment used in bauxite and other mining operations.

The company will also offer forklifts under the Hangcha brand, inclusive of manual pallet lifters, 45-foot personnel lifters and motorised 3-10 ton forklifts.He acknowledged concerns in the equipment rental and supply market that Tank-Weld Equipment would siphon business away from them, but said that was not their intent.

“A lot of people have asked us that very same question and all we’ve said is that we are comfortable staying in our own lane,” we’re not going after anybody at all we’re offering a product that is an alternative to pieces of equipment out there,” Ralston said.

To bolster the big expansion, Ralston says Tank-Weld added another three bays to the company’s workshop at Six Miles in Kingston, bringing the total to nine, and is in the process of adding another 3,500 square feet of workspace.The dealership now employs 88 persons on staff, plus other contracted workers who do spray-painting, body work and other irregular or specialist jobs.

Tank-Weld has declined to comment on the level of investment being made.

“We don’t really like to blow the horn with our investments but I can say that it is a lot of money,” Ralston said, much of which, he added, is tied up in the inventory and introductory offerings.

Friday’s showcase at Olivier Road in Kingston will feature 27 pieces of equipment, from trucks to forklifts.