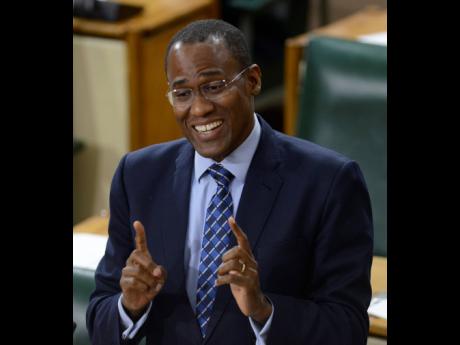 The value of the Jamaican dollar is at historic lows, but Finance Minister Nigel Clarke is bullish about its future prospects.

Clarke said on Wednesday that the successful execution of an inflation-targeting regime should allow Jamaica, within five years, to be able to offer its first Jamaican-dollar bond to international borrowers – a goal that economic experts and strategists polled by the Financial Gleaner believe is realistic and would serve to further raise the country’s economic profile.

The minister also reported that foreign holders of Jamaica’s sovereign bonds ­denoted in US currency were receptive to the idea of a JMD issue at a roadshow he recently headlined overseas.

A Jamaican dollar float would require investor confidence, and economist Damien King believes Jamaica is headed in the right direction.

“The reason most countries cannot borrow in their own currencies internationally is that the lenders have no faith in the long-run value of their currencies. If a loan is denominated in Jamaica dollars for, say, J$1 million, when it matures many years from now, how much in US dollars will that Jamaican million be worth?” said King, who heads think tank CaPRI and lectures in economics at The University of the West Indies.

“Low, predictable inflation addresses that problem. Low inflation, which is the goal of inflation targeting, is the ­foundation of long-run exchange rate ­stability. It is therefore also the foundation of that potential international lender ­having confidence that the money he lends in Jamaican will have retained its (US ­dollar) value when the loan is ­repaid,” he said on Thursday, when asked for ­comment on the minister’s goal.

“It’s definitely doable once we keep our fiscal targets in line, staying with the fiscal rules, keeping our inflation targeting in place and also building the institutional framework, such as the independent central bank. Other countries have done it, once they have increased confidence in their fundamentals and built confidence on the international market,” said Duncan, who also heads large financial conglomerate JMMB Group.

“Brazil did it ... I would say we can probably do it within five years,” he said.

The value of the Jamaican dollar to its main trading counterpart, the US dollar, fell to a historic rate of $138.10 on July 18. The minister said the movement was market-determined. The JMD’s best rate for this year was $124.76 on March 13.

The value of the Jamaican dollar falls when the exchange rate rises. At the current rate, it is worth less than 1 US cent or U$$0.007.

Clarke, who spoke at the Foreign Exchange Market Development Symposium, staged by his ministry at the Bank of Jamaica Auditorium in Kingston, said the central bank cannot focus on inflation as the central goal of monetary policy without a flexible exchange rate regime.

The ministry is on a public education campaign to counteract calls from ­private-sector members who want a more interventionist approach to the currency market, one that brings demand and supply conditions closer to equilibrium, to address the volatility in the exchange rate.

The Bank of Jamaica’s response has been two fold: that businesses need to budget their foreign currency needs instead of purchasing cash at the point when bills become due; and that the volatility would be addressed by a forex trading platform that is being developed for banks and other dealers to trade currency with each other. Currently, they trade with the central bank.

Clarke noted that the two-way movement of the exchange rate, as determined by supply and demand, was a companion policy to the search for low and stable inflation. He also cautioned businesses that their lobby for a different approach to the foreign exchange market could lead to bad outcomes, citing the experiences of Jamaica’s neighbours.

“In other markets in the region where a flexible exchange rate is not in force, no matter what they say, people are still ­lining up for days, weeks, months. Those of you who have exposure in the Caribbean know what I am talking about – the inability to obtain foreign exchange for months at a time, or weeks at a time,” Clarke said.

He also said at the symposium that while Jamaica has been affected by runaway inflation for much of its history, the country has seen fit to put its fiscal house in order by reorienting towards low, stable and predictable inflation as the primary goal of monetary policy.

Calling high inflation “the enemy”, the finance minister said it “discourages ­investment, that leads to capital flight, that leads to the misallocation of resources, and that retards development and retards the standard of living”.

Inflation erodes the value of money over time, which means that a $100 spent today would buy fewer of the same goods and services next year in an inflationary ­environment. The higher the inflation rate, the more value that is lost.

Inflation in Jamaica climbed as high as 77.3 per cent historically in 1992. Annual inflation was tracking at 4.2 per cent in June, which is at the low end of the central bank’s medium-term target range of 4 to 6 per cent. In calendar year 2018, annual inflation was 2.4 per cent. (See Page 18 for graphic produced by Statin on Consumer Price Index data for June.)

Clarke ticked off a series of other economic positives at the symposium, including: growth over 17 quarters; the lowest unemployment rate ever in Jamaica – now at 7.8 per cent; adequate reserves – now at US$3.035 billion, which offers 20.5 weeks of import coverage; foreign direct investment ­inflows of about five per cent of GDP over the past three years; and a current account deficit that is now about three per cent of GDP.

Those and other conditions, he said, placed Jamaica in a different paradigm.

Not only was a flexible exchange rate a prerequisite for a flexible inflation-­targeting framework, the finance minister noted, it was a goal with strategic intent – that of tapping the international capital markets for debt denominated in local currency.

“Countries like German and Japan have credible internal policies that incentivise international creditors to lend to them in their own currency. When a country has that creditability and it can borrow internationally in its own currency, the risk to that economy is greatly reduced, and its ability to be prosperous over a long period of time is greatly enhanced.”

He added that Jamaica was on a similar trajectory but needed a credible inflation targeting-regime and flexible exchange rate to get over the finish line.

He advised that investors who hold ­billions of US-dollar denominated Jamaican bonds and were part of his recent international roadshow, were “looking forward to the day that they can ­potentially lend to us in our own currency”.

“I put it to you that Jamaica is on a path,” said the finance minister. “Within the next five years, Jamaica will be able to borrow on the international market in Jamaican dollars,” he said.

Dr Adrian Stokes, group strategist for Scotia Group Jamaica, also believes the minister is on the right track, and that accomplishing the goal would be a ­significant economic accomplishment.

“You will get there over time if our ­monetary authority – in our case, the central bank – has the confidence of the market, and if the fiscal authorities – in our case the Ministry of Finance and the government apparatus – do a good job and continue on the trajectory that Jamaica is on, then it is definitely foreseeable that we could go on the international market and borrow in our own currency. That would be a very big accomplishment,” he said.