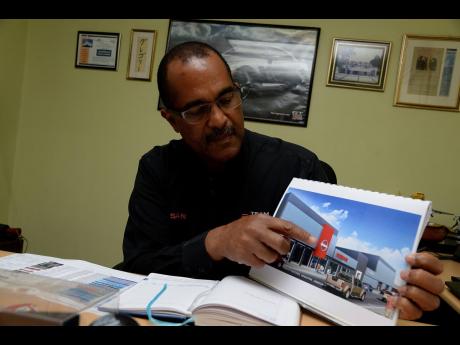 Lionel Rookwood
In this January 30, 2018 file photo, Managing Director of Fidelty Motors Limited Major Gregory Webster displays an image of the Nissan showroom to be developed in downtown Kingston.

The Nissan dealership operated by Fidelity Motors was in a celebratory mood on Wednesday with the ­opening of its renovated showroom at Hanover Street in Kingston, notwithstanding that the Japanese carmaker that supplies the brand is looking to shed jobs as profits fall.

Fidelity itself is owned by Barbadian company Goddard Enterprises Limited, which also operates Nissan dealerships in other Caribbean markets.

The Kingston showroom facility, which was only said to be a multimillion-dollar investment, is geared at giving Fidelity competitive advantage against car dealers Toyota Jamaica, ATL Automotive and Stewart’s Automotive. Its aim is to be recognised as one of the top-three local car dealers in the medium to long term.

“We have maintained about five per cent of market share over the last 10 years, we want to double that, but our number-one goal in Jamaica is to be in the top three of the mindset of the customers. We are going to expand our product line, we are looking at vehicles that are going to be in the market next year,” said Senior General Manager of Courtesy Garage, which forms part of the Fidelity Motors Group, and board ­member, Nicholas Mackie.

“In the past we were reacting to customer’s need; that is changing. We are not reacting anymore, we are being proactive, even before customer think about they will need in a vehicle. That’s the trend,” he told the Financial Gleaner.

Fidelity’s investment in downtown Kingston covers 96,200 square feet of space, 7,000 square feet of which will be used as a showroom. A section of the facility will also be used for garage and body shop purposes. Technological advances of the building include touch-screen TVs and tablet vehicle stands.

The project followed a blueprint set out by Nissan Motor and can hold 10 vehicles.

Fidelity has disclosed no immediate plans to hire additional staff, but Managing Director Major Gregory Webster said the company should increase its staff complement to manage operation once the new line of vehicles are shipped to Jamaica next year.

The Financial Gleaner previously reported plans by Fidelity to expand its vehicle fleet with vehicles made by Chinese-Japanese alliance Zhengzhou Nissan Auto, ZNA, which consists mainly of pickup trucks. The fleet should have its own showroom on additional land owned by Fidelity nearby at the corner of Harbour and Hanover streets.

“We want to electrify the market with electric vehicles in the near future as well as some other vehicles, and we are really working hard to make that happen,” Mackie said, noting that the both hybrid and electric vehicles are being requested by customers.

Up to 2009, Fidelity Motors was a joint venture between Goddard and Jamaica’s GraceKennedy Limited which, in part, determined the car dealer’s proximity to the GraceKennedy headquarters.

The redeveloped facility is the third change for the car dealer which has been in Jamaica for 18 years, but was said to be the most capital-intensive.