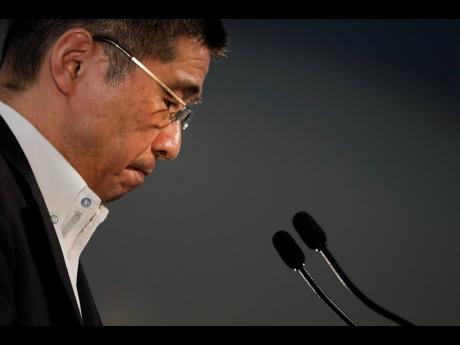 AP
Nissan CEO Hiroto Saikawa pauses for a moment during a news conference at the global headquarters on Thursday, July 25, in Yokohama, west of Tokyo.

Nissan is slashing 12,500 jobs or about nine per cent of its global workforce to cut costs and achieve a turnaround amid tumbling profits, the Japanese automaker said Thursday.

Nissan Motor Company also said it will cut global production capacity by 10 per cent and reduce model line-ups by at least 10 per cent by the end of fiscal 2022.

Nissan Chief Executive Hiroto Saikawa said most of the job cuts will be auto plant workers. He did not give a regional breakdown, but said the job cuts were needed to cut global production capacity and cut costs.

A company presentation said more than 6,400 jobs would be eliminated in eight unspecified locations by the end of this fiscal year. Another 6,100 will come by fiscal 2022, it said.

Saikawa told reporters at the automaker’s Yokohama ­headquarters that sales are ­expected to begin to recover but it will take time. Some of the ­efforts have already begun, he said.

The Japanese automaker is struggling to fix its brand image and get growth going again following the arrest of former Chairman Carlos Ghosn.

Ghosn says he is innocent. He is awaiting trial in Japan on various financial misconduct allegations.

“Our situation right now is ­extremely severe,” Saikawa said, noting that attractive ­models were coming with technology like ­artificial intelligence and zero emissions to boost sales.

“Our stance to lead the industry is unchanging.”

In April-June, Nissan’s profit nose dived to ¥6.4 billion (US$59 million), down drastically from ¥115.8 billion the same quarter in the previous fiscal year. Quarterly sales shrank 13 per cent to ¥2.37 trillion (US$22 billion).

For the fiscal year that ended in March, annual profit dropped to less than half of what Nissan earned in the previous year, at ¥319.1 billion (US$2.9 billion), the worst showing since the global financial crisis a decade ago.

Although Ghosn’s absence from Nissan and its alliance with Renault SA of France, which owns 43 per cent of Nissan, have been a concern, the latest results were so dismal that questions about Ghosn weren’t raised.

Christian Stadler, professor of strategic management at Warwick Business School, said the ­scandal over Ghosn’s case was a distraction that has undermined Nissan’s business, on top of challenges faced by the auto industry as a whole.

“The economic slowdown, which hit key markets such as the United States and China, the uncertainty surrounding Brexit, and the race to embrace new technology as the crackdown on diesel continues, all contributed to Nissan’s fall in sales and will continue to do so,” he said.

Nissan’s global vehicle sales in the April-June period fell six per cent to 1.23 million vehicles, ­declining in Japan, the US, Europe and other global markets, although sales held up in China despite slowing ­demand. Rising raw ­material costs and currency fluctuations also hurt profits, the company said.