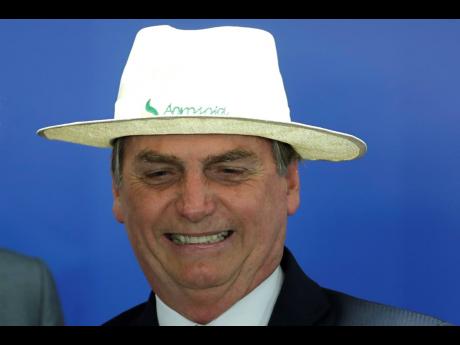 AP
Brazil's President Jair Bolsonaro smiles while wearing a Soya Growers' Association hat at the end of a swearing-in ceremony for the newly-named president of Brazil's Development Bank, at the Planalto presidential palace, in Brasilia, Brazil, Tuesday, July 16, 2019.

From a global economic perspective, the recent changes in global trade patterns are not favourable for Brazil.

The wave of globalisation that started with the end of the Cold War in the early 1990s, and culminated with the incorporation of China into the global economic system in 2001, generated an enormous demand for raw materials. Brazil sits atop a treasure trove of industrial commodities, and it was able to benefit enormously.

In the space of 20 years, Brazilian exports jumped more than fivefold. More than a trillion dollars of foreign investment flowed in, and the level of economic activity spiked. According to the World Bank, between 2003 and 2009, more than 22 million Brazilians were pulled out of poverty. This process was boosted by the appreciation of the currency and the expansion of consumer credit.

Unfortunately, much of the population did not have experience with consumer credit, and they found themselves overextended by 2012. In 2014, the economy entered a prolonged recession, along with a consumer deleveraging process. Now, international commerce is moving in the opposite direction.

Trade wars are proliferating, ­tariff barriers are being erected, and the United States and Europe have eschewed multilateral trading arrangements in favour of bilateral agreements.

The globalisation pendulum has reached its maximum position. Not surprisingly, the Chinese economy is decelerating, and its ravenous ­appetite for raw materials is being tapered.

Fortunately, every cloud has a ­silver lining.

Although Mexico is better positioned to take advantage of the new global trends in trade, there are important changes occurring in Brazil which will prove to be extremely beneficial.

Indeed, there were two major results from the deep recession of the past five years. The first was the complete stabilisation of the Brazilian economy.

Ever since the early 1980s, the country has struggled with inflation. There were several bouts of hyperinflation during the 1980s and early 1990s, where Brasilia was forced to cycle through several different currencies.

In July 1994, the government of Itamar Franco introduced the Real Plan, which broke the yoke of ­hyperinflation. However, the central bank still had to deal with unceasing inflationary demons. For decades, it was forced to pursue tight monetary policy, employing double-digit ­interest rates. Most of the time, Brazil had the highest interest rates in the region, thus becoming the perennial carry trade for many hedge fund managers and investors.

However, the deep recession of the past five years slayed the inflationary monster and the country has been able to enjoy low-single-digit inflation, despite wild gyrations on the exchange rate front.

The second important development was the deleveraging of consumer balance sheets. Not only did ­consumers reduce their debt levels, they developed a greater appreciation and respect for credit products. They realised the benefits and perils of consumer debt. Hence, these two developments resulted in the transformation of the domestic credit environment.

Armed with a track record of ­extended low inflation, the Brazilian central bank has been pushing down interest rates and keeping them low. Mexico now has the honour of ­having higher interest rates, which has ­dethroned the Mexican peso as being the favourite hedging instrument for emerging market investors.

Consequently, long-term Brazilian currency interest rates have also been trending down. This has led to a ­proliferation of new consumer products. Local-currency term life insurance policies, which used to be limited to one year, are ballooning. Single-digit, local-currency, fixed-rate mortgages are multiplying, and many local ­corporates are turning to the BRL markets to raise long-term capital.

The interesting thing is that this is occurring prior to the approval of the pension reforms. While the reforms are steadily progressing through the approval process, one of the promised benefits of the new system is going to be the creation of a domestic, private pension fund system. This would be similar to the ones found in Chile, Peru, Colombia, Uruguay and Mexico.

Not only do these private pension systems reduce the state’s fiscal burden, they become a major source of local funding. Local pension funds have turbocharged and transformed these economies, reducing, or in some cases eliminating, their need to access the international markets for funding. There is so much local capital in Chile and Peru that the private pension funds have been allowed to invest a meaningful part of their portfolios abroad.

The sea of liquidity generated by the Mexican pension funds has ­created a deep market for local (and international) MXN bond issuers. Therefore, imagine what will ­happen in Brazil.

If a burgeoning market of long-dated BRL instruments is already being created, imagine what will happen when the new domestic pension fund system comes on line. The Brazilian economy will witness a meteoric expansion.

Dr Walter T. Molano is a managing partner and the head of research at BCP Securities LLC.. wmolano@bcpsecurities.com