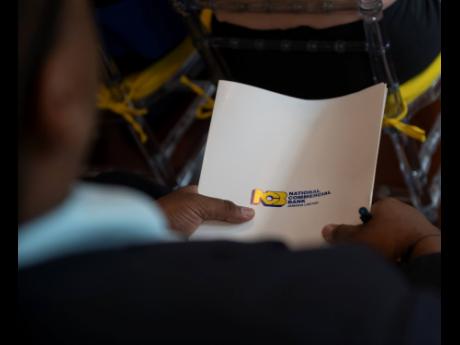 Gladstone Taylor
A participant in the investors briefing hosted by NCB Financial Group holds a booklet with the logo of the group’s commercial banking business on display, at the NCB Wellness Centre in New Kingston on Friday, July 26, 2019. 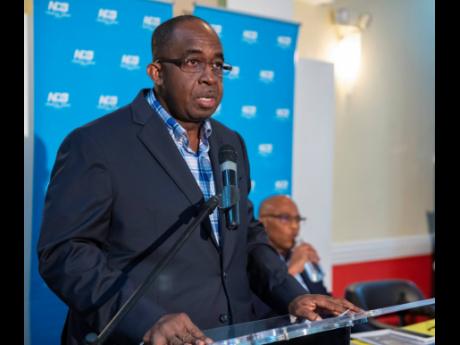 Banking conglomerate NCB Financial Group Limited is weighing the possibility of raising additional capital as buffer for its enlarged Caribbean operation that has now surpassed a trillion dollars in assets.

The group expects to organically bolster its capital with accumulated profits, but also remains open to other options.

“Capital is a big discussion at the level of the board now,” said NCB chief financial officer and deputy CEO Dennis Cohen in response to a Financial Gleaner query at the quarterly investors briefing on Friday about the possibility of a rights issue.

“Going forward, capital will be a major focus and we will focus on retention of profitability over time, and possibly other options we can look at,” he said.

NCB Financial, which operates Jamaica’s No. 1 bank, made $8.9 billion of net profit for the third quarter ending June, up 27 per cent. Over nine months, the group made $21.3 billion in net profit compared to $20.95 billion a year earlier.

The boost came from growth in NCB Financial’s core operation and the ­amalgamation of newly acquired regional insurance conglomerate Guardian Holdings Limited, GHL. NCB Financial increased its stake in GHL from 29.99 per cent to 62 per cent in a US$207-million takeover in May.

The amalgamation, while adding profit to operations and also growing NCB Financial’s total asset by about 60 per cent to $1.6 trillion, resulted in a downside. Its capital, while growing nominally to $176 billion, suffered a decline as a percentage of total assets – falling from 16.6 per cent to 11 per cent.

The group had a large jump in policyholder liabilities to $421 billion from $38 billion a year earlier.

President and CEO Patrick Hylton said at the briefing that the group in acquiring GHL has ticked off one item off its to-do list – that of achieving net profit of US$200 million in one year. It surpassed that target last year with net profit of US$215 million.

The next mission is to grow NCB’s footprint utilising GHL’s regional network, he said.

Cohen said in order to retain capital, NCB would put a halt to major acquisitions for the time being, but otherwise declined to comment on the other measures under consideration.

To return to a capital to assets ratio of 16.6 per cent ratio, NCB Financial would need to raise $80 billion to $90 billion, based on Financial Gleaner estimates.

NCB Financial Group did not give a target for growing its capital by year end, which for the company will be in September. Instead, Cohen said the group typically discusses such matters with its regulator, the company’s board and analysts and rating agencies.

As for the problems that the banking group has been experiencing from a major systems upgrade, NCB said amid apologies that it expects to have the matter resolved by August.

NCB said it underestimated the system design and functionality, and that the upgrade led to payroll errors, late salary payments and delayed electronic transfers.

“It was a difficult learning curve for us. We know the last few weeks have not been easy for our ­customers,” the bank said.