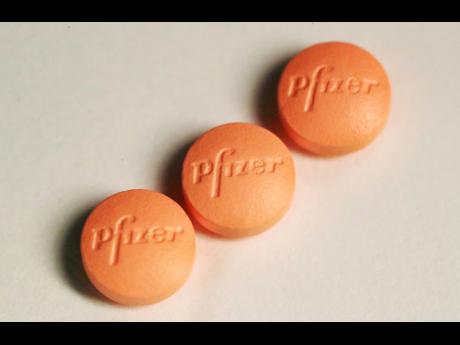 AP
In this April 26, 2019, file photo, RELPAX migraine pills manufactured by Pfizer are arranged for a photo in Doral, Florida.

Pfizer is spinning off a big chunk of the company, culminating a series of major deals aimed at reshaping the drugmaker into a slimmer but faster-growing operation.

The biggest United States-based drugmaker announced the latest move on Monday – that of combining its Upjohn business, which sells off-patent former blockbuster drugs, with generic drugmaker Mylan into a new company to be created next year – as it reported a 30 per cent jump in second-quarter profits.

“These are deliberate steps that we are taking to make Pfizer a very different company,” new CEO Dr Albert Bourla told analysts during a conference call to discuss the Mylan deal and the latest financial results.

Among Pfizer’s steps since January are the just-completed acquisition of biotech company Therachon Holding AG to gain an experimental drug that could be the first treatment for a type of dwarfism called achondroplasia; the pending US$11.4-billion acquisition of Array BioPharma Inc, which sells two melanoma drugs and is developing additional medicines for cancer and other conditions with limited treatments; and the August 1 start of a joint venture combining Pfizer’s consumer health products with those of British drugmaker GlaxoSmithKline Plc.

Bourla, formerly Pfizer’s chief operating officer until he took over as CEO in January, said in an interview that as he prepared for the promotion over the prior year, he helped put all those moves in motion while developing Pfizer’s strategy for the next decade, along with predecessor Ian Read.

Pfizer just created the Upjohn business at the beginning of this year by peeling off carefully selected off-patent drugs that were part of Pfizer’s established products division. Upjohn now sells many of Pfizer’s greatest hits from the past quarter-century that have generic competition but still sell well in many countries: Viagra, painkillers Celebrex and Lyrica, Norvasc for high blood pressure, Effexor for severe heartburn, Xanax for anxiety, and Zoloft for depression. Those drugs contributed about 23 per cent of Pfizer’s total sales last year.

“We believe that this transaction checks all the boxes,” Bourla said, by setting up a new company with an attractive dividend, strong management, and a huge portfolio and network of factories around the world.

Mylan sells a broad mix of generic pills and shots for infectious diseases and heart conditions, plus the EpiPen auto-injector for stopping allergic reactions, a product Pfizer manufactures for Mylan.

Bourla said that Mylan also has a strong pipeline of drugs in development, mainly complex generics that are difficult to manufacture and biosimilars, near-copies of expensive biologic drugs.

Pfizer reported second-quarter net income of US$5.05 billion, or 89 cents per share, up from US$3.87 billion, or 65 cents per share, a year earlier. Earnings, adjusted for non-recurring gains and gains related to mergers and acquisitions, amounted to 80 cents per share in the latest quarter, three cents better than Wall Street analysts expected.

The New York-based drugmaker posted revenue of US$13.26 billion, down two per cent from US$13.47 billion in the year-ago quarter.