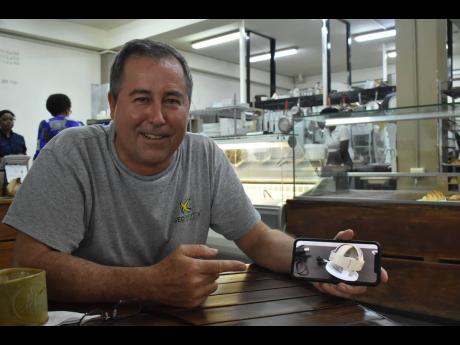 Mining start-up Geophysx Jamaica plans to ramp up exploration activities in August, having spent $200 million to build out its operations.

The company holds a dozen licences to explore for copper, zinc, gold and other minerals, said founder and principal Robert Stewart.

Geophysx will start electromagnetic testing next month to identify the scope of underground deposits, and after analysing the data, will start drilling for metals in October, utilising a diamond rig, which is currently on its way to Jamaica.

“The equipment we are bringing in next month is an airborne electromagnetic platform that’s never been used in Jamaica before,” said Stewart, who is the sole shareholder in Geophysx.

The company has found two targets that appear high in copper and zinc, and will use the tests to define the extent of the find.

“So, I truly feel there’s a lot of stuff that’s undiscovered,” he said.

Stewart described mining as a rocky business, with the chance of success at 10,000 to one, but with a high return on investment following discoveries. Geophysx will utilise modern methods and equipment, and is hiring local and global experts to reduce the odds to a more manageable level. Some of these methods include geochemical techniques never utilised before in Jamaica and new analytical tools, Stewart said in an interview with the Financial Gleaner.

“The best odds will be 100 to one. Jamaica is underexplored and the mining industry has had bad luck in the past. There are a lot of opportunities, and if we push the odds to the limit, then we might get lucky,” he said. “The pay-off if it works will be very good and more than enough, which is why I feel so strongly about it.”

Stewart entered the business after taking a sabbatical from the Sandals Resorts hotel chain, leading senior positions in technology and marketing. Following recovery from a life-threatening illness, he decided to venture into mining.

“I felt the need to do something to contribute to Jamaica, as I felt that I had already made my maximum contribution to the family business,” he said. Stewart is the son of Sandals Resorts founder and chairman, Gordon ‘Butch’ Stewart.

Geophysx so far has licences to explore for ore. Mining requires different permits. For the company to move from exploration to mining, it requires a series of surveys and analyses to determine the geochemistry of the ore, the prospective deposits, and the best extraction methods. At the mining stage, the raising of additional capital through public offerings or partnerships is required to finance extraction of the ores.

“Geophysx specialises in looking for high-grade deposits, since we feel they can be advanced with lower impact on the environment,” he said.

“What I have spent so far is a fraction of the cost … ,” said Stewart of his $200 million investment, while noting that he is considering adding investors down the road to spread the costs.

In June, Canadian company Carube announced that it sold six licences to Geophysx, bringing the local company’s tally to 12 licences.

Geophysx has 30 direct employees and more than 100 part-time workers in the field, said Stewart, and most of its operations are centred in St Mary, followed by Clarendon and St Andrew. The company is hunting for office space in Kingston.