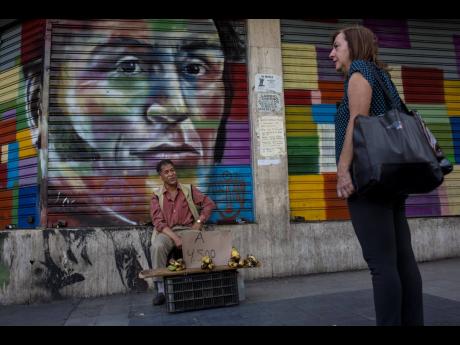 AP
A street vendor sells bananas in front of a painting with the image of Venezuelan Independence hero Simón Bolívar, in Caracas, Venezuela, on Tuesday, July 16.

The cumulative decline of the Venezuelan economy since 2013 will reach 65 per cent, among the deepest five-year contractions around the world over the last half-century, the International Monetary Fund, IMF, said on Monday.

Alejandro Werner, director of the IMF’s Western Hemisphere Department, said the Venezuelan decline is historic because it is unprecedented in the hemisphere, and also because it is the only one among top global five-year contractions that is unrelated to armed conflicts or natural disasters.

The IMF adjusted its 2019 forecast for the South American country to a contraction of 35 per cent rather than the 25 per cent decline expected back in April due to a sharp fall in the oil production, which has already plunged to its lowest level in seven decades.

Werner said the inflation forecast for 2019 has also been adjusted downwards from the 10 million per cent expected in April to below one million because of a recent increase of the legal reserve ratio imposed on local banks by the Venezuelan central bank.

Venezuela economic contraction shows up in the third position globally, only surpassed by Georgia and Libya, which is at the top with an 80 per cent contraction during the period 2010-2015.

Werner said the IMF expects the economy of Latin America and the Caribbean as a whole to grow 0.6 per cent in 2019. But if the calculation is done for the rest of the region while excluding Venezuela, the regional average of projected growth is 1.3 per cent.

“This reflects the big challenges the region faces in order to establish a process of sustainable growth,” Werner said in a news conference.

Werner said Venezuela’s prolonged crisis could push the migration from the country up to five million people by the end of the year. He said that this exodus has meant a slight economic bump for host countries such as Colombia, even after the investment needed to support 1.5 million migrants.

The migration flow “has placed on the Colombian government the need to relax its fiscal goals and increase public spending in order so support this population,” he said. “It generates a positive impact on the economic growth.”

Werner noted that the Central Bank of Chile had cited immigration from Venezuela and other countries as one of several reasons to increase its economic growth estimates.

Werner said the effect can be positive as long as the migrants bring skills demanded by the local labour market, though it also depends on the strength of the public finances in each country.