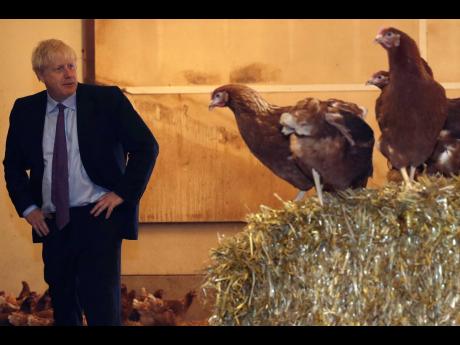 British Prime Minister Boris Johnson visited Wales on Tuesday on a national tour to reassure voters that his push for Brexit, “come what may”, won’t hurt the economy and rip apart the United Kingdom. The move failed to persuade currency markets, as the pound slid to a new 28-month low.

A day after Johnson was booed in Scotland, he faced another tough reception from farmers – a group central to the Welsh economy – who fear economic havoc if Britain leaves the European Union (EU) without a divorce deal. They say millions of sheep might have to be slaughtered if tariffs are slapped on lamb exports to the EU.

Johnson said after visiting a south Wales poultry farm that the government would support farmers if their markets became “tricky.”

“We will look after the farming sector,” he said. “We will make sure that they have the support that they need.”

But National Farmers’ Union President Minette Batters said Britain exports 40 per cent of its lamb and mutton, most of it to EU nations.

Johnson’s Conservative government argues that leaving the 28-nation bloc and its rules-bound Common Agricultural Policy will be “a historic opportunity to introduce new schemes to support farming” and will open up new markets for UK agricultural exports.

The government’s Wales Secretary Alun Cairns said “90 per cent of global growth will come from outside of the EU”. However, trade with the EU accounts for almost half of all British exports, and any new trade deals are years away.

The trip follows a visit on Monday to Scotland, where Johnson was booed by protesters and warned by First Minister Nicola Sturgeon that his vow to take Britain out of the EU on October 31 with or without a deal was “dangerous”.

Britain’s 2016 vote to leave the EU divided the country and also strained the bonds among the four nations that make up the UK: England, Scotland, Wales and Northern Ireland.

A majority of voters in England and Wales backed leaving in the referendum, while Scotland and Northern Ireland voted to remain. That has emboldened Scotland’s nationalist government to demand another vote on independence, arguing that Scotland should not be forced out of the EU against its will.

Johnson also plans a visit to Northern Ireland, the only part of the UK to share a land border with the EU. The status of that currently invisible frontier with the Republic of Ireland has become the main stumbling block to a Brexit deal.

The pound has fallen sharply in recent days as businesses warn that no amount of preparation can eliminate the economic damage if Britain crashes out of the EU trading bloc without a Brexit deal. The currency fell early Tuesday to US$1.2120, its lowest value since March 2017.

“Investors’ main concern remains a hard no-deal Brexit, which has the potential to pull the economy into chaos,” said Fiona Cincotta, senior market analyst at City Index. “Boris Johnson’s new Cabinet did little to alleviate those fears, taking a hard line with Europe on forthcoming negotiations.”

Johnson became prime minister last week after winning a Conservative Party leadership contest by promising the strongly pro-Brexit party membership that the UK will leave the EU on the scheduled date of October 31, with or without a divorce deal.

The EU struck a withdrawal agreement with Johnson’s predecessor, Theresa May, but it was rejected three times by Britain’s Parliament. Johnson is insisting the bloc make major changes to May’s spurned deal, including scrapping an insurance policy for the Irish border that has been rejected by UK lawmakers.

“We’re not aiming for a no-deal Brexit,” said Johnson, who looks set to paint the EU as the bad guy if there is no deal.

The EU insists it won’t reopen the 585-page withdrawal agreement it spent two years negotiating with May’s government, and particularly won’t remove the ‘backstop’, which is designed to ensure the Irish border remains free of customs posts or other barriers.

A hard Irish border would disrupt people and businesses on both sides, and could undermine one of the foundations of Northern Ireland’s peace process.

UK Brexit supporters hate the backstop because it requires that Britain follow EU trade rules to ensure an open border.

There are currently no new Brexit negotiations planned between Britain and the bloc, and neither side appears to be backing down.

Johnson’s office said he spoke by phone on Tuesday with Irish Prime Minister Leo Varadkar, telling him “that his clear preference is to leave the EU with a deal, but it must be one that abolishes the backstop”.

Varadkar replied that “the backstop was necessary as a consequence of decisions taken in the UK and by the UK government,” the Irish leader’s office said.

It said Varadkar had invited Johnson to Dublin for talks. Downing Street said only that the two leaders “agreed to stay in contact”.