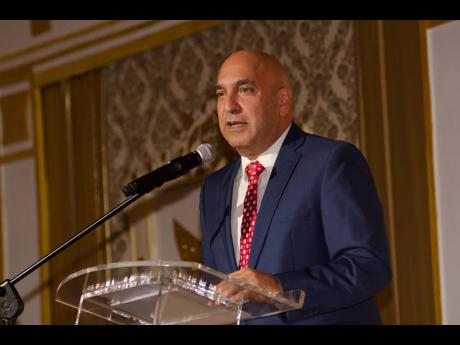 Insurance conglomerate Sagicor Group Jamaica continues to grow at a fast pace, with second-quarter revenue and profit both jumping by more than a third.

Most of the growth came from existing services, but the group is also in an acquisitive mode and continues to hunt for deals.

“The earnings are from core operations, sales and expense controls,” said president and CEO Chris Zacca at a briefing held at Sagicor’s headquarters in New Kingston on Tuesday to announce the June second-quarter financial results.

Over six months, the individual life insurance segment had the largest jump in revenue, from $12.65 billion in the 2018 period to $16.4 billion, while its wealth arm, Sagicor Investments Jamaica, benefited from the largest jump in profit – a 21 per cent growth in earnings per share to $1.64.

Sagicor Group holds more than $22 billion in cash. Its latest acquisition, through Sagicor Investments, is a 60 per cent stake in general insurance provider Advantage General.

The company took the lead in a consortium that also includes Fundy Bay Equity Holdings, a new outfit connected to Advantage General’s CEO Mark Thompson, which is taking a 34 per cent stake in Advantages and Donovan Lewis’ Resource in Motion, which will hold six per cent.

Closing off the US$50.5-million deal with seller NCB Capital Markets is subject to regulatory approval, but Zacca said Sagicor has already started the process of integrating shared services, such as accounting, investment management and IT, which previously were provided by NCB.

“We are well advanced in our regulatory filings. The team met with the Financial Services Commission on Friday and we feel comfortable that the process of approval is progressing well and we expect a positive result,” he said at the briefing.

“The minute that happens, we will be in a position to close and take control of Advantage General,” he said.

Zacca added that job cuts are unlikely at Advantage, as there is little duplication of services.

“There will be no retrenchment at Advantage General. In fact, we will probably be hiring additional people,” he said.

Advantage will become a subsidiary of Sagicor Investments but operate with its own board, he said.