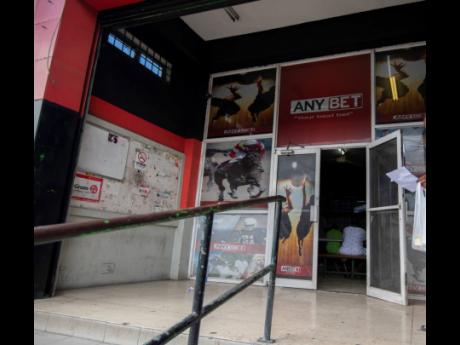 Gladstone Taylor
Persons are seated inside a Any bet shop operated by Post to Post Betting on Thursday, August 1, 2019. The Fair Trade Commission is examining the takeover of the bookmaker by Supreme Ventures to determine whether it is anti-competitive.

The Fair Trading Commission, FTC, has initiated an investigation into whether the acquisition of Post to Post Betting Limited by Supreme Ventures Limited, SVL, is likely to adversely affect competition in the bookmaking market.

Supreme Ventures gained control of Post to Post on July 1, having completed the $572.2-million deal in mid-June. The gaming conglomerate told the Financial Gleaner that it was cooperating with the fair trade regulator to provide any information requested in what it described as FTC’s due diligence process.

FTC Executive Director David Miller says his agency’s investigation is expected to wrap up in August.

Stakeholders approached by the competition watchdog to weigh in on the acquisition include market participants Capital Betting and Wagering Limited, Ideal Betting Company Limited, Island Bet and Jamozzie/BetCris and the sector’s regulator, the Betting, Gaming and Lotteries Commission (BGLC), which maintains records on the market’s sales, payout and gross profit.

Bookmaking services can be described as any business that accepts bets on the outcome of sports contests and pays winners based on the mutually agreed odds, said the FTC. Sales in the bookmaking market, as reported by sector regulator BGLC, was over $4.9 billion in fiscal year 2017.

In its July 2019 newsletter, FTCNewsLine, the competition agency said it learned of the proposed acquisition of Post to Post through media reports in May.

“Should this proposal materialise, it would represent a substantial change in market structure of the bookmaking services industry, as two of the island’s largest bookmakers would become one,” the FTC said.

Supreme Ventures previously disclosed to the market that the acquisition of a 51 per cent stake in Post to Post was completed on June 14, and that it had nominated three directors to the bookmaker’s board – namely SVL President & CEO Ann-Dawn Young Sang, Ansel Howell and Xesus Johnston.

Post to Post Betting itself arose from the 2013 merger of Jamaica’s largest bookmaking companies – Champion Betting, Track Price Plus Limited and Markham Betting. At the time, the three firms operated about 188 betting shops across Jamaica.

Supreme Ventures said this week that the Post to Post chain now comprises 35 shops. Asked about the apparent shrinkage of the network, the gaming company said it could only speak to the operations of the business since its acquisition

Bookmakers take bets for events such as horse racing, simulcast racing and other sports such as football and the National Basketball Association or NBA games. They then pay betters according to their odds.

Any Bet is said to be Jamaica’s largest sports bookmaker. It controls some 73 per cent of the bookmaking market, based on sales, according to data published by the BGLC in its annual report for the year ending March 2017.

SVL also owns and operates the sports-betting game JustBet. The gaming company holds about 19 per cent of the bookmaking market through its wholly owned subsidiary Prime Sports, according to the BGLC data.

Supreme Ventures is the leading player in the lottery-gaming market and is owner of Jamaica’s only horse-racing track, Caymanas Park, which it acquired from the Jamaican Government in 2017.

The gaming company earns most of its revenue from its lottery operation, which accounted for $9.2 billion of the $18.6 billion of revenue collected over the period January to June 2019. Horse racing accounted for $3.5 billion in the same period, while sport betting contributed just $158 million to group sales.

Over the past two years, the sports betting segment has averaged 6.7 per cent of total SVL revenues.