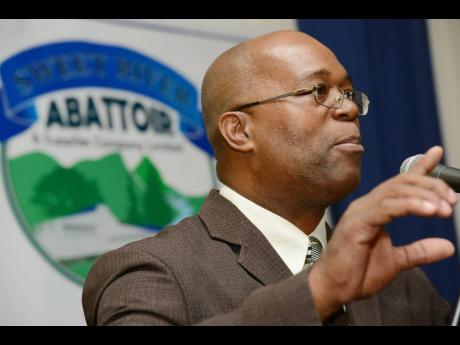 Sweet River Abattoir and Supplies Company Limited said in a market filing Wednesday that its Managing Director, Valdence Gifford, had resigned his post, effective May 31.

The disclosure by the board of directors comes a little over a week after the former head of the cash-strapped Abattoir was arrested and later released following complaints from five pig farmers against Sweet River regarding debts amounting to $2.8 million.

According to reports from Superintendent of the Westmoreland Police Division, Gary McKenzie, Gifford was arrested on a judgment warrant on July 16. The company, which condemned the arrest, said full payment was made to the farmers and Gifford was released two days later on July 18.

But Sweet River is also now facing pressure from its bank, after missing a July 1 loan payment. A day after Gifford’s release, the company said, First Global issued a demand notice for the immediate repayment of the outstanding $116 million from a loan of $180 million used to construct Sweet River’s new abbattoir.

Gifford continues to serve as managing director on a contractual basis until a replacement is selected. He also remains a member of the Sweet River board. Sweet River said in an earlier filing that Gifford would be pursuing legal remedies as a result of his arrest.

A year after listing on the junior market of the Jamaica Stock Exchange in 2014, the company’s revenue and profits have been under pressure, which it blamed on significant increases in the cost of pigs from contractual arrangements, coupled with a severe shortage in supply of the animal.

Sweet River had been working on a turnaround plan, but given current developments, it advised the market this week that the plans to bolster its balance sheet and address governance issues would need to be expedited.

“The stock exchange will be advised of this process shortly,” the disclosure said.

Its most recent quarterly results showed that losses at Sweet River increased to $15.5 million for the three months ending March, compared to $14.7 million posted for the similar quarter of 2018. Its yearly audited results are pending, but its losses at year ending March 2018 topped $113 million.

Earlier this year, the SRA stock was suspended from trading after Sweet River failed to satisfy ongoing requirements pertaining to the filing of its annual report for the year ended March 31, 2018, which became due on July 29, 2018, and furnishing a disclosure regarding the renewal of a lease for its offices.

Efforts at comment from Gifford and managing director of the stock exchange, Marlene Street Forrest, were unsuccessful.