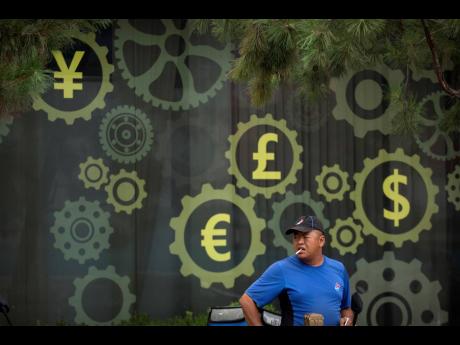 The Associated Press
In this July 20, 2018, file photo, a deliveryman for American based pizza chain Domino’s prepares to make a delivery near a mural displaying Chinese yuan and other world currency symbols on the outside of a bank in Beijing.

China’s yuan fell Friday to its lowest level this year against the dollar following US President Donald Trump’s threat of new tariffs on Chinese goods, coming close to breaking the politically ­sensitive level of seven to the US currency.

The yuan tumbled to 6.9520 to the dollar, its lowest level since December, but recovered slightly by midday.

The currency’s weakness is helping to fuel Washington’s trade complaints. The US Treasury Department declined in May to label China a currency manipulator but said it was closely watching Beijing.

Trump’s tariff hikes in a fight over China’s trade surplus and technology ambitions have put downward pressure on the yuan by fuelling fears economic growth might weaken.

Chinese leaders have promised to avoid “competitive devaluation” to boost exports by making them less expensive abroad. But regulators are trying to make the state-controlled exchange rate more responsive to market forces, which are pushing the yuan lower.

The level of seven yuan to the dollar has no economic significance, but could revive US attention to the exchange rate.

“The Chinese yuan can push above its 6.85-6.90 range towards 7,” said Philip Wee and Eugene Leow of DBS Group in a report. “The latest tariff threat will add to China slowdown worries, which markets believe can only be assuaged by a trade deal.”

The yuan, also known as the renminbi, or “people’s money,” has lost 4 per cent since hitting a high in February of 6.6862 to the dollar.

That helps exporters cope with tariffs of up to 25 per cent imposed by Trump on billions of dollars of Chinese goods. But it raises the risk of inflaming American complaints.

Trump rattled financial markets Thursday by announcing plans for 10 per cent tariffs on US$300 billion of Chinese goods, effective September 1. That would extend penalty duties to almost all US imports from China.

“The new tariff escalation will likely put more depreciation pressure on the CNY,” said Tao Wang of UBS in a report. Still, she said Beijing is likely to “tightly manage” the exchange rate “to avoid any significant depreciation.”

China’s central bank sets the yuan’s exchange rate each morning and allows it to fluctuate by 2 per cent against the dollar during the day. The central bank can buy or sell currency – or order Chinese commercial banks to do so – to dampen price movements.

A weaker yuan also might disrupt Chinese efforts to shore up weakening economic growth by encouraging an outflow of capital from the world’s second-largest economy. That would raise borrowing costs.

The central bank tried to discourage speculation last August by imposing a requirement that traders post deposits for contracts to buy or sell yuan. That allows trading to continue but raises the cost.

The People’s Bank of China is unlikely to weaken the yuan intentionally “because Beijing will not want to inadvertently jeopardise macro and capital market stability,” said Vishnu Varathan of Mizuho Bank in a report.