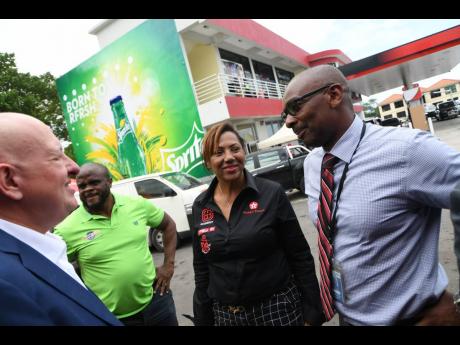 Petrol dealer Annette Wong-Lee says growing up in a clan of nine boys and two girls not only prepared her to hold her own, but to stand out in the tough world of the auto industry.

She has now delivered what is being described as Jamaica’s first ‘service station arcade’, a multipurpose complex with a Texaco petrol station at its centre.

“Growing up with boys like that it allowed me to understand how to operate in what is commonly called a man’s world,” she said in an interview with the Financial Gleaner.

“As a result, most of what I’ve done in life has been in the rough-and- tumble sectors. I can be a girly-girl, but I don’t consider myself as such,” she said.

Wong-Lee’s first business was a grocery store at age 17, followed by a beauty salon, and then car rentals. She has other investments in the petrol market but is not saying much about them.

As for the arcade at 94M Old Hope Road, it took more than $200 million to purchase and upgrade the site.

Located at the foot of Beverley Hills on the corner of Old Hope Road and Mountain View Avenue, the fuel island at the forecourt has the obligatory three pumps with service points for three types of fuel on either side. There are also two car-wash bays.

A striking feature of Wong-Lee’s service station is the imposing two and a half storey split-level. The lowest half-storey houses a spacious industrial-type garage, which could see future use as place for repairs.

The forecourt-facing side of the structure is two storeys, with five tenants upstairs: a clothing store, a dentistry called Dental Works, a microfinance firm, a natural-care store offering products for hair and skin, and a pharmacy. The lower level houses a convenience store, a Moneygram outlet, a lottery shop, and a Paymaster agency, all operated by Wong-Lee.

There is more to come, with an NCB ATM to be installed and a Popeye’s franchise that is already advertising its pending opening.

“I approached the design concept with the year 2030 in mind. I was very involved in it, and I am really looking well into the future,” she said.

The Texaco arcade was financed by National Commercial Bank, with a loan of more than $200 million, Wong-Lee says.

The petrol station is a new acquisition for Wong-Lee. She had been operating what was a badly run-down service station at that location for 10 years before Country Manager for GB Energy Jamaica Mauricio Pulido called her in two years ago for talks on purchasing the place from Texaco.

Wong-Lee says that while she was negotiating the purchase, she came up with the arcade concept as a way to transform the business. Pulido loved the idea and assisted Wong Lee with the necessary linkages to make it happen.

“After I purchased the station, I knew that I had to do serious renovation, and the quicker I did that the better it would be for me in paying back a big bank loan,” the businesswoman said.

“Looking at the changes in the industry, I am seeing electric cars, LPG, and so on. Those factors represent a risk that there will be changes that may affect my ability to service debt, certainly over the next three to five years,” she said.

“Margins are low on gas, so I thought it would be best to diversify my income streams by adding other facets,” she told the Financial Gleaner.

Wong-Lee is not new to the gasolene retail industry. She says she has been at it for 25 years and owns two other service stations under other brands in Kingston and St Catherine.

Her introduction to the market came while she was operating her own car-rental business with a fleet of 20 cars, which has since been sold.

Mario ‘Castro’ Dietrich, an engineer who had expertise in developing petrol stations, saw an opportunity and urged her to take it.

“He told me about a gas station where he was sure that I could make much more money than even the foreign currency rent-a-car business I had,” she said, then going on to describe how Dietrich’s sales pitch turned out to be true within hours of opening.

“In the first four hours, I made so much money that I was convinced that I could really make millions from this business,” Wong-Lee said.

As for Texaco, she heaped praise on both the marketing company and its leader, saying that they make it easy to do business with them.

“He (Pulido) did things like giving me credit on the initial deliveries of gas. They helped to put in the tanks. They structured payment plans to give me breathing room. I wasn’t burdened by those things that would flow from having total ownership,” Wong-Lee said.