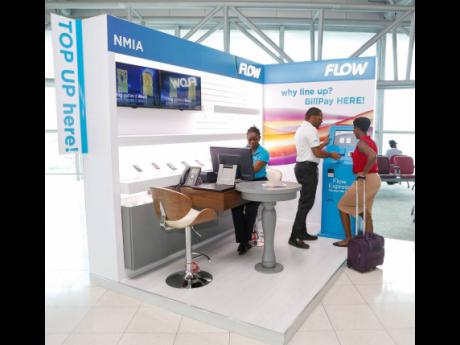 In this November 2016 photo, Flow Jamaica staff man a kiosk at the Norman Manley International Airport. In the June quarter of 2019, Flow Jamaica added 76,000 subscribers since the launch of its ‘Blue’ campaign in April.

Cable & Wireless Jamaica, which trades as Flow, added a large block of customers during the June quarter, while amassing US$99 million in sales, which translates to $13.5 billion in local currency.

The quarterly sales in Jamaica grew 15 per cent year-on-year which was aided by the launch of Flow’s unlimited mobile plan. The telecoms marketed the ‘blue’ campaign in reference to its brand colour, in contrast to the red of rival Digicel.

“In the second quarter, we added 76,000 mobile subscribers in Jamaica following our ‘Paint Jamaica blue’ campaign, which we launched in early April. We also see opportunity to expand average revenue per user in Jamaica in the second half and into 2020 as we continue value proposition,” said Balan Nair, president and CEO of Liberty Latin America, in an investor call on Wednesday.

Liberty did not reveal the size of its subscriber base for the June quarter, and Flow is yet to respond to requests for the data. But assuming the new numbers are a net addition, and assuming no subscribers were lost in March, it means that Flow Jamaica’s mobile subscriber base is now around 1.012 million, when added to the numbers disclosed by Liberty for December 2018. Jamaica’s subscriber base then was reported to be just shy of 936,000.

Liberty Latin America’s year end stated that Jamaica subscribers numbers totalled 935,900 for mobile, 190,600 for fixed broadband Internet, 196,700 fixed-line customers and 118,100 video subscribers. There is some amount of overlap with the broadband and video subscribers only. Its mobile subscribers were reported to be 912,900 in June 2018.

Liberty Latin America operates across the region via three main subsidiary companies – the Liberty brand, C&W Communications and Cabletica. The group grew revenue by six per cent to US$983 million in the second quarter, but it’s losses quadrupled in the same period to US$111 million, compared to a net loss of US$27.5 million a year earlier. The loss grows to US$156.6 million for the quarter after currency movements and pension related adjustments.

The company, however was less concerned about its net position and more focused on free cash flow as a measure of how its plans and operational spending are generating cash. The measure discounts the heavy depreciation and amortisation charges associated with infrastructure investments on the core network.

In the June quarter, Liberty’s free cash flow improved to a positive US$68 million, compared to negative cash flow of US$14 million a year earlier.

Nair indicated that the aggregated operations across the region performed better than anticipated and consequently upgraded their cash flow outlook.

The company’s capital expenditures fell in the quarter to US$135.8 million, compared to US$237 million a year earlier, which positively contributed to the growth of free cash flow.

Nair added that the company recorded solid operational “momentum” in the second quarter, with additions of 110,000 fixed and mobile customers. Of that number, fixed customer additions grew by more than 60,000, which was described as the “best second-quarter performance in over a decade”. Mobile additions grew 44,000 across the group, which meant that additions in Jamaica were offset by declines in other markets, such as The Bahamas.

“Our video and voice subscribers grew as we were successful in bundling up products, particularly in C&W markets of Panama, Jamaica and Trinidad,” Nair said.