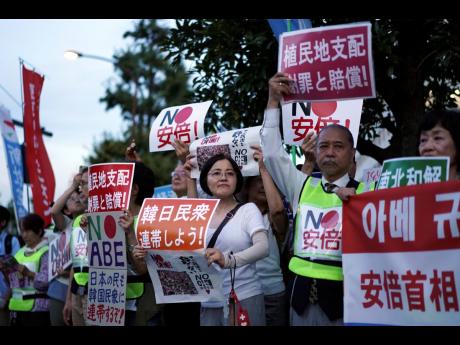 The Associated Press
AP A group of protesters gather outside Japanese Prime Minister Shinzo Abe’s residence in Tokyo Thursday, August 8. They staged a rally with placards to urge the government to apologize for wartime atrocities in an effort fix rapidly souring relations.

Japan said Thursday it has granted its first permit for a South Korea-bound shipment of chemicals to produce high-tech materials under Tokyo’s new export requirement that has increased tensions with Seoul.

Trade Minister Hiroshige Seko made a rare announcement of the approval, saying that officials determined that the transaction raised no security concerns. The move is apparently meant to calm South Korean anger over Tokyo’s export curbs and show there is no trade ban in place.

Japanese chemical manufacturers have expressed concerns that case-by-case inspections may prolong the approval process and hold up production for their customers.

The first approval came after about a month, faster than the standard 90 days.

“The permit merely demonstrates that export licensing by the Japanese government is not arbitrary, and is granted to any legitimate transactions that pass strict inspections,” Seko told reporters. “The step we took recently is not an export ban.”

South Korean President Moon Jae-in remained cautious while expressing hope the impact of Japan’s measures won’t be as severe as Seoul had feared.

“Our government has planned for a worst-case situation since Japan converted its export approvals of the three materials to a case-by-case basis and has been preparing and announcing both short-term and long-term measures,” he said.