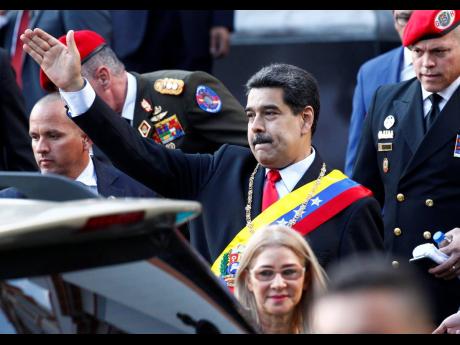 The Associated Press
President of Venezuela Nicolas Maduro, accompanied by first lady Cilia Flores, waves to supporters as he leaves the National Pantheon after attending a ceremony to commemorate an 1800's independence battle, in Caracas, Venezuela, Wednesday, August 7, 2019. Sweeping new U.S. sanctions freeze all of the Maduro government's assets in the U.S. and even threaten to punish companies from third countries that keep doing business with his socialist administration. (AP Photo/Leonardo Fernandez) 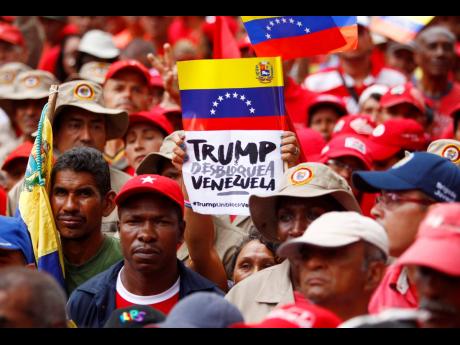 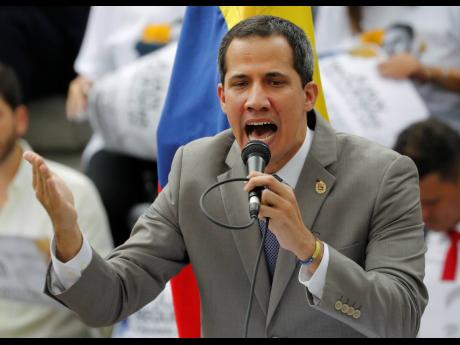 The Associated Press
Opposition leader and self-proclaimed interim President of Venezuela Juan Guaido speaks during a protest asking for the freedom of opposition lawmaker Juan Requesens, in Caracas, Venezuela, Wednesday, August 7, 2019. Requesens has spent a year in prison and is accused in an assassination attempt on President Nicolas Maduro. (AP Photo/Ariana Cubillos)
1
2
3

Venezuela’s government late Wednesday halted negotiations with the opposition in protest of the Trump administration’s freezing of its US assets, thrusting into crisis the country’s best chance of peacefully resolving a political stand-off that has kept the nation on the edge for more than six months.

The government stopped short of abandoning the talks altogether, saying only that it would “review the mechanisms of this process to ensure its continuation is truly effective and harmonious with the interests of the people”.

For weeks, representatives of Maduro and his would-be successor have been shuttling back and forth to Barbados trying to agree on a common path out of the country’s prolonged political stand-off. The meetings have been slow-going and shrouded in mystery, with neither side disclosing details.

But Maduro’s supporters have accused the United States of trying to blow up the fragile process with sweeping new sanctions announced this week that freeze all of the government’s assets in the US and even threaten to punish companies from third countries that keep doing business with his socialist administration.

“They’re trying to dynamite the dialogue,” Foreign Minister Jorge Arreaza said Tuesday at a news conference to denounce comments by US National Security Adviser John Bolton defending the asset freeze. “But nobody, not even 1,000 Trumps or 500 Boltons ... will make us abandon the negotiating table”.

Maduro said Wednesday night that while he favours dialogue, he will not stand by idly as his opponents cheer on punitive measures by the US that he believes will worsen hardships in a country already suffering from six-digit hyperinflation, medicine shortages and a recession now deeper than the US Great Depression.

“Under these conditions, no,” he said in a telephone call to a programme on state TV hosted by socialist party boss Diosdado Cabello.

Maduro promised to lead a “counteroffensive” from the constitutional assembly – a rubber-stamp body set up to undermine Venezuela’s opposition-controlled congress – to “bring justice to the sellouts and traitors”.

Opposition leaders reacted to Maduro’s withdrawal from the talks with a mix of disbelief and told-you-so admonishments.

“They’ve been saying for days they believe in peace and the Oslo mechanism, but at the first sign of change they fear the possibility of a real political change in the country,” lawmaker Stalin Gonzalez, the head of Guaidó’s negotiating team in Barbados, said on social media.

Speculation has swirled in political and diplomatic circles that Maduro’s envoys have expressed a willingness to call an early presidential election under a revamped electoral board and foreign observation. The US has insisted Maduro must give up power before any elections can be deemed credible.

Three people involved in the talks from different sides had described the environment as serious and cordial, with each delegation dining and travelling back and forth to the island from Caracas separately. All three insisted progress has been made, even if the thorny topic of elections is being left for last and an all-encompassing deal based on a six-point agenda is some way off. The people agreed to speak to The Associated Press only on the condition of anonymity because they weren’t authorised to divulge details of the talks.

To be sure, nobody in the Trump administration has disavowed the talks, and some analysts believe Bolton’s “bad cop” persona and his threats of more punitive actions to come may even provide a boost to the mediation effort.

Guaidó, who heads the opposition-controlled congress, has shown no willingness to ditch the talks despite pressure to do so from hawks inside his coalition who accuse him of turning a blind eye to Maduro’s alleged torturing of opponents.

Maduro, although severely weakened by the US sanctions and increasingly isolated internationally, still enjoys the support of powerful allies like Russia and China. He also has the backing of the military, the traditional arbiter of disputes in Venezuela. Neither the military nor the US has been a party to the talks, even though Maduro’s main goal is the removal of US sanctions.

Meanwhile, Guaidó’s momentum has stalled since he declared himself interim president in January over what the US and some 50 other nations saw as Maduro’s fraudulent re-election last year. Demonstrations that at the start of the year filled the streets of Caracas have thinned to a trickle, and a military uprising called for by Guaidó in April ended with several opposition lawmakers on the run or in exile.

“As long as each side pursues a winner-take-all approach, they are less willing to make concessions and a deal will remain elusive,” said Phil Gunson, a Caracas-based analyst for the International Crisis Group.