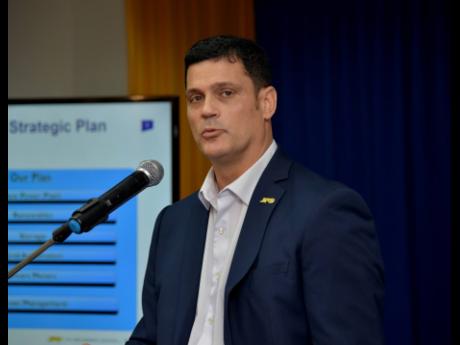 Power utility Jamaica Public Service Company Limited, JPS, plans to spend more than US$500 million over the next five years on investment in its infrastructure.

The capex programme includes new initiatives, such as a network of charging stations for electric vehicles, and setting up a series of micro-grids to incentivise large customers to stay with JPS rather than build their own power units.

They form part of the JPS’s five-year Investment Plan dating from 2019, as an essential component of the power utility’s rate design and 2019 rate-case filing with the Office of the Utilities Regulation, OUR. JPS also released a separate five-year business plan, as one of a series of documents uploaded simultaneously on its regulator’s site.

Electricity bills are a summation of non-fuel and fuel charges, plus consumption taxes where applicable: JPS proposes to increase the non-fuel portion by 12.9 per cent on average, according to the filing. The fuel portion of the bill is however expected to dip by about five percentage points over the period, due to efficiency measures, including the commissioning of the LNG-powered Old Harbour Power Plant. It is this expected movement of both non-fuel and fuel charges which JPS projects should result in average movements of 3.2 per cent on its customers’ electricity bills.

“The next five years will see JPS continuing to break new ground in meeting stakeholder demands. To this end, the company will invest more than US$508 million between 2019 and 2024,” said JPS president and CEO Emanuel DaRosa in his opening statement in the business plan delivered to the OUR.

Overall, JPS plans to spend 22 per cent more than the US$416.3 million invested over the previous five years.

Components of the capex budget include US$140 million to be spent on upgrading or replacing its 640 megawatts of daily generation; and US$208 million to upgrade the national transmission and distribution network.

In regard to electric vehicles, which the utility views as an emerging opportunity, JPS said it recognised the need to invest in infrastructure for this technology to create a new revenue stream, and will spend some US$1.5 million to build out the network.

“JPS will also roll out 20 electric vehicle charging stations as the base requirement for the development of the Jamaican electric vehicle industry. This investment will provide the means through which electric vehicle owners in Jamaica can overcome range anxiety, giving them the peace of mind to travel the island without fear of being out of charge,” the company said.

The utility expects 30 per cent of electric vehicle penetration by 2030.

As part of its growth agenda, JPS plans to commission at least two distributed generation projects during the period. This will see no less than 14 MW of generation placed directly on feeders where large customers reside, boosting reliability and reducing the incentive for grid defection, the utility said.

“This is a major prong of the growth strategy as it encourages commercial and industrial customers to remain on grid while allowing them to reliably expand their production. These distributed generation investments will lay the foundation for the establishment of micro-grids in Jamaica. Micro-grids will bring the benefits of improved reliability, lower technical losses, reduced grid congestion, and a lower peak load,” JPS added.

The US$416 invested by JPS under its previous five-year plan ending 2018 which aided in the reduction of the cost of fuel and led to better customer service delivery, JPS says in its current document. Electricity rates averaged US$0.33 per kilowatt-hour in 2014 and declined to US$0.28 per kilowatt-hour in 2018 – a reduction of 16 per cent – which the electricity distributor said was driven primarily by a 28 per cent decline in fuel rates as well as improved fuel diversification, improved efficiency and increased kilowatt-hours sold.

Over five-year the period, JPS made cumulative profits of US$138.7 million from revenues of US$4.2 billion.

“However, net profits remained relatively flat over the period, averaging US$27.7 million annually,” the company said.

JPS achieved an average return on investment of 6.9 per cent in the period, relative to the allowed 12.25 per cent.