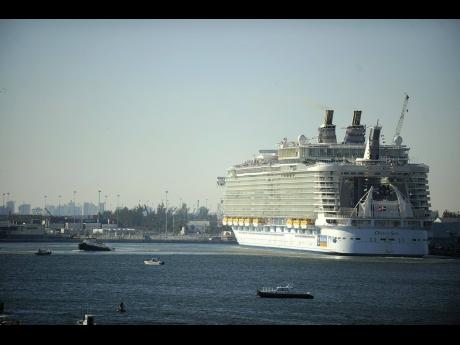 Jamaica has reported ­another contraction in cruise passenger arrivals for June 2019, but there is hope that the country should see increases in arrivals, given plans for the development of a new cruise berthing facility in George Town, Grand Cayman.

Cruise passenger arrivals to the country dipped by 27.9 per cent for the month of June to a total of 66,552 passengers. Data from the Jamaica Tourist Board showed that passengers visiting the port of Ocho Rios fell by 20.7 per cent with 25,569 passengers, while ­visitors to the port of Montego Bay fell by 42.4 per cent to 17,144 passengers.

Falmouth also recorded a decline of 20.1 per cent to 23,839 passengers. The contraction in cruise passenger arrivals has impacted sales for the Dolphin Cove attraction, which gets 50 per cent of its cruise ship guests from the Falmouth port.

“This is primarily due to the Oasis of the Seas class of vessel not being able to have the ship call on Grand Cayman,” vice-­president of cruise shipping at the Port Authority William Tatham told the Financial Gleaner.

“The ship is so large, they have to clear all the paths to do security screening on the passengers onshore, and because of that, they weren’t able to have the ship call on Grand Cayman,” he continued.

Traditional itinerary for cruise routes to the western Caribbean were Haiti, Jamaica, Grand Cayman, Cozumel – Mexico’s ­largest island – and back to Florida.

“Because the west sail was missing Grand Cayman, we saw a decline in the Oasis class. The good news is that Grand Cayman is very optimistic about building a new port berth to accommodate the Oasis, and Royal Caribbean has been very much saying that we will see a complete turnaround, so the numbers for Falmouth will climb right back up,” Tatham reasoned.

Grand Cayman’s planned pier and berth are expected to be operational by 2022. Carnival Cruise Line and Royal Caribbean will help fund the project, which will cost about $200 million.

Oasis-class vessels weighs 220,000 tonnes each and have a carrying capacity of 6,000 passengers.