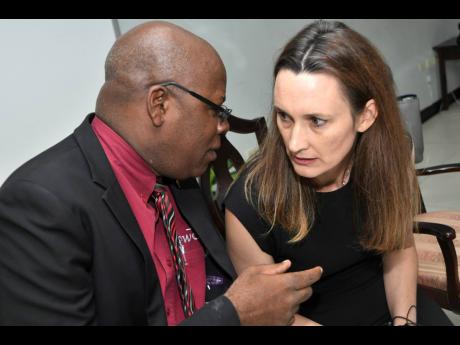 Stanley Motta Limited, real estate developer of 58HWT in Kingston, has done away with any thought of using the General Accident building as a residential complex to increase earnings for the company.

Instead, Chairman of Stanley Motta Melanie Subratie has put forward plans to increase the square footage of all five buildings on the six-acre property, acquired by Stanley Motta from the Musson Group of Companies, either directly or through its wholly owned ­subsidiary, Unity Capital.

“It definitely won’t be residential, but there is interest from other tenants to rent this building. We are looking at other options while exploring the opportunity cost of increasing our square ­footage,” Subratie told the Financial Gleaner during the company’s first annual general meeting since its listing on the Jamaica Stock Exchange last year.

Subratie was tight-lipped on the details for expansion, noting that the discussions are now at board level. She, however, noted that over the next two years, the company expects to have clearly outlined plans for the development and could be returning to the market for funding.

“We don’t expect to go to the market in the short term, but if we were to build we would seek some funds. We pay out most of our returns as dividends; this was promoted as an income stock. If we were to build, we are not going to be picking apart people’s ­dividends,” Subratie said.

For its financial year ended December 2018, Stanley Motta recorded revenue of $296 ­million, an increase of 273 per cent over 2017’s $72 million. Net profit for the period jumped to $2 billion compared to $853 million for 2017, which was bolstered by the revaluation gain on the property of $1.9 billion upon completion of construction works.

With a 100 per cent occupancy rate, the signed leases should ensure that Stanley Motta holds a steady stream of income over the next five years.

Stanley Motta currently charges US$12.09 ($1,668.42) as rental rate per square foot. Tenants are also required to pay another US$3 ($414) per square foot towards maintenance and other charges, part of which will go to an assigned property maintenance company.

From its earnings, Stanley Motta will service loans totalling US$4.45 million ($591.8 million) from the Development Bank of Jamaica, repayable over 12 years at ­interest rate of 4.5 per cent. Secured by land and buildings owned by subsidiary Unity Capital Incorporated, Stanley Motta also has a repayable loan amount of $170 million over 16 years and eight months at an ­interest rate of 11.375 per cent.

Last July, the company placed on offer ownership in a business ­process outsourcing and ­technology park consisting of five buildings at 58 Half-Way Tree Road, in addition to participation in the capital appreciation of the ­property and income from its ­triple-net, US dollar-denominated leases. The offer allowed the company to raise $4 billion in equity capital.

According to the company’s prospectus, tenants, which are mostly in the fast-growing BPO sector, are locked into lease arrangements spanning four to five years, with options to renew. Going forward, the company noted that it will also be looking at three-year lease agreements.

Units 1, 2 and 3 were constructed in 2017, while the five-­storey Unit 4 building was completed in April 2018. Stanley Motta has ownership over building 5 — the General Accident complex — through St Lucia-based company Unity Capital.

Its largest tenant on the six-acre property is Alorica, which occupies 75 per cent of the space.

Further development of the property would allow Stanley Motta to swiftly respond to demands from local and ­international companies for prime locations in Kingston, according to Subratie.

The company, named for its founder Stanley Motta, was ­established in 1948 as a trader of electrical appliances. In 1983, it was acquired by Musson but went dormant in 1998.

In 2015, Musson revived Stanley Motta as the vehicle through which it would develop the 58HWT complex.