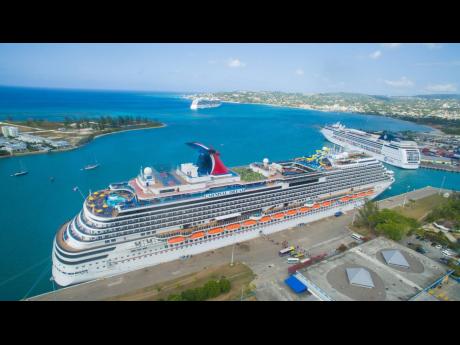 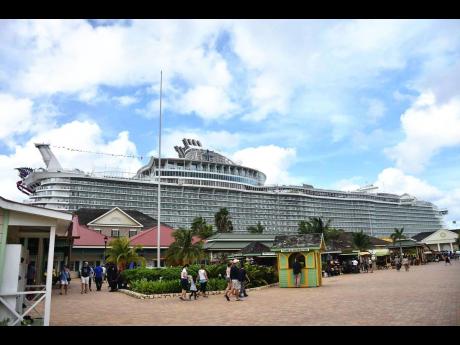 File
Royal Caribbean’s ‘Harmony of the Seas’ is docked at the Falmouth port in Trelawny.
1
2

Cruise tourism has become a big business, with the Caribbean now accounting for more than 35 per cent of all such vacations globally.

This year more ships will sail in or through Caribbean waters than in any other part of the world, with many of the one hundred plus new vessels under construction destined to do the same.

Despite this, no government or industry body has yet been able to focus with any success on how little the cruise lines contribute to Caribbean development, government revenues, or the local economy. Nor have they found ways that equitably relate cruise tourism to the now regional economic importance of the hotel sector, the ancillary onshore demand that long-stay visitors create, or the higher taxes they pay.

Statistics produced by the Caribbean Tourism Organisation, CTO, show that there were 29.2 million cruise ship visitor arrivals into the Caribbean in 2018, a figure roughly equal to the 30.2 million long stay visitors who came by air to stay in hotels and other onshore facilities.

However, these figures are misleading. Cruise ship passengers almost all stayed for only a small part of a day and visited multiple countries, raising questions about double counting. In contrast, visitors who arrived by air stayed on average for seven nights in a single location, contributing, according to CTO, 11.5 times more than cruise passengers to the local economy and to government revenues.

Unfortunately, there seems to be little in the way of consistent or reliable recent reporting as to exactly how much either category of visitor left behind of what they spent.

Figures produced by the cruise industry, governments and tourist boards provide some indication of gross spending, but, for not well explained reasons, vary significantly from country to country and are not up to date.

Reports relating to 2015 indicate that cruise visitors to the United States Virgin Islands spent between US$138 and US$158 while the average visitor arriving there by air spent between US$200 to US$250 each day of their stay. However, figures for cruising to other destinations for the same year are much lower, with, for example, such visitors to The Bahamas recorded as spending US$$83 and to Barbados US$78.

Help is however at hand to better understand the broader impact of cruise tourism and the issues that governments and the region’s tourism industry after a long period of silence ought to revisit.

In June, the Washington-based Center for Responsible Travel, CREST, published a detailed and balanced study: ‘Cruise Tourism in the Caribbean: Selling Sunshine’. Edited by the organisation’s outgoing executive director, Dr Martha Honey, it sets out for industry professionals the ways in which governments, tourist boards, citizens and the industry might change the nature of their future discourse with the cruise lines.

Apart from containing a contemporary analysis of cruise tourism, its environmental and social impacts, and the effects of climate change and overtourism, its 180 pages outline the reforms needed if cruise tourism is to bring greater benefit to the region.

Although some of the solutions it proposes will undoubtedly prove controversial with the cruise industry, the publication identifies many practical ways to resolve the problems they have created.

It offers ideas as to how to address the issue of the low head taxes that the cruise lines presently pay to government, suggests the need to incentivise home porting, indicates the important lessons to be learned from the negative experiences of Venice and Barcelona, discusses length of stay, and points to the positive models elsewhere the region might emulate.

But more importantly, ‘Selling Sunshine’ suggests the need for a cruise industry that is genuinely Caribbean-focused rather than one that exist solely to benefit the owners of the big cruise companies. As such its narrative and recommendations require serious consideration by any Caribbean politician who genuinely has at heart the need for national and social development.

The study follows an earlier interesting commentary by Robert C, the managing director of MacLellan & Associates, a Caribbean-based hospitality consultancy.

He suggests that to have the normally intransigent cruise companies bring greater benefit, Caribbean governments should learn from the Organisation of Petroleum Exporting Countries, OPEC, and establish an Organisation of Tourism Economy Countries.

MacLellan argues that the weak negotiating position of individual Caribbean and Central American governments has many similarities to OPEC member states sixty years ago, and that a ‘rebalancing’ strategy should now be pursued by the Caribbean when it comes to the cruise lines. In this way, he suggests, not only could the issue of head taxes be addressed, but other issues of benefit to the region might be considered. Recent conferences on tourism held in Jamaica and Washington demonstrate that there is a growing appetite and anger among Caribbean participants for change. They say that what is required is a more equitable basis on which cruise ships operate in the region.

Frank Comito, executive director of the Caribbean Hotel and Tourism Association, believes that there is plenty of room for both the land and sea-based industry but what is required is for cruise lines’ involvement to be more balanced.

He observes that while the cruise lines have been a good corporate partner in times of crisis, supporting the immediate relief and recovery of destinations affected by hurricanes, many in the industry believe that they should be doing far more to protect and enhance the environment, develop the tourism product, support local businesses, and grow the Caribbean’s tax base.

He says that hotels and other local tourism partners bear the brunt of the tax burden on the tourism industry, contributing heavily to destination-improvement initiatives and local social causes, helping to market their destinations, and helping to enhance and protect the environment.

What is needed, he says, is a resolve by all stakeholders to work together on these and for the cruise industry to become a more engaged, conscientious partner.

Cruise ships have a potentially important socio-economic and environmental stewardship role to play in the Caribbean, but their contribution has to be about much more than helping in times of crisis or, for example, building piers or offering a handful of jobs and scholarships, and being able to sail away at will.

As Honey, MacLellan and Comito suggest, it is time to explore how the cruise lines can be encouraged to put much more back and play a genuinely sustainable developmental role in return for the value they derive from the Caribbean and their use of the region’s exclusive economic maritime zone.