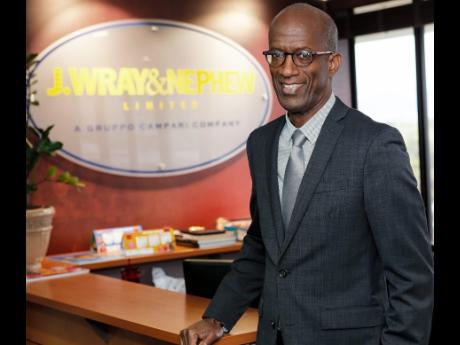 Chairman of J Wray & Nephew Limited Clement ‘Jimmy’ Lawrence has taken the reins as chairman of the Spirits Pool Association Limited, the 87-year-old umbrella organisation made up of rum distillers in Jamaica, amid a quarrel over safeguarding the integrity of Jamaican rum.

Having taken over on July 31, at the end of some 40 years of service to the association by his predecessor R. Evon Brown, Lawrence will now oversee the bulk molasses purchasing and rum industry advocacy roles of the association.

He will now become the chief referee for a simmering quarrel over what constitutes Jamaica Rum as defined by the global Geographical Indication, or GI, the rules for the classification, and the naming and labelling of Jamaica rum registered in 2016 by the Jamaica Intellectual Property Office, JIPO.

In an interview with the Financial Gleaner on Wednesday, Lawrence says during his tenure the Spirits Pool would be focusing on several issues including sourcing molasses at the best price locally and globally to meet the needs of all the distilleries, a common marketing code of conduct for the industry, responsible labelling of alcoholic beverages, and reducing harmful uses of alcohol.

He added that the association was also still concerned about unfair subsidies being provided by the United States Government to rum producers in its Caribbean territories of Puerto Rico and the US Virgin Islands against World Trade Organization rules. This long-standing matter has seen no forward movement in the many years since it has been raised by Jamaican rum producers.

On the matter of the differences among Jamaican distillers on the GI issue, Lawrence said he would be adjudicating the matter in an impartial way.

“Yes, there are still some issues and want to make sure that at the end of the day, they are all fully ventilated and we get to a position driven through a process of consensus,” Lawrence told the Financial Gleaner. “Each distillery is looking at it in terms of their own needs, activities and commercial requirements,” he said.

Lawrence points out that all Jamaican distillers were involved in the lengthy discussions to arrive at the current GI, a process that was anchored by JIPO. Noting that the Spirits Pool is participatory in its approach to the issues affecting the Jamaican rum industry, the new chairman is of the view that the current differences on the issue are not beyond the group’s capacity to resolve.

“We are committed as a group to making sure that in the balance, it reflects the majority. Through consensus we can resolve any issue that we have.” He adds that the talks were at a sensitive stage.

Industry sources say the arguments for changes to the GI to include among other things, additives like sugar, was being advanced by NRJ. Industry analysts note that while the Jamaica Rum GI is specific about the production conditions for Jamaican rum, there is no specific reference to post-distillation sugar, sweet wine or other additives. In this regard, it is felt that the document does not specifically disallow what some refer to as adulteration.

This is despite the Jamaican Excise Duty Act, which governs the production and sale of rums in Jamaica stating that: “Except as may be otherwise permitted by the Commissioner, nothing shall be added to any spirits in a distillery save colouring matter or water.”

United Caribbean Rum is a Barbados holding company and a wholly owned subsidiary of Compagnie de Bonbonnet SAS, a privately held French holding company. Bonbonnet, which owns a number of subsidiaries, including Cognac Ferrand, operates a large global spirits business, which includes the production and sale of gins, vodkas, rums and cognacs.

All the other distilleries are said to be united in their opposition to the NRJ suggestion - opposition that has been played out on platforms at various rum promotion events locally and overseas.

Appleton’s renowned master blender Joy Spence is reported to have declared at a panel discussion at the recent New York Rum Festival her opposition to sugar being added to Jamaican rum. This position was reportedly also echoed at the same event by Christelle Harris of Hampden and Alexander Kong of Worthy Park. Up to press time, CEO of National Rums Winston Harrison was not available to give a comment.

Lawrence this week reiterated that Appleton’s ultimate owner, the Italian Campari Group, was not supportive of any dilution of the Jamaican rum product as defined by the GI, having acquired the Jamaican business for its authentic Jamaican products and experience. The former Spirits Pool chairman, Evon Brown, himself formerly of NRJ before becoming chairman of the association declared to the Financial Gleaner in an interview earlier this year that: “We are not going to allow any watering down of the authentic Jamaican rum brand. We are now going to use the tool of GI to promote our rums in this exclusive market.”

Lawrence, who is employed by Campari, says he committed to being fair and balanced in his approach to this and other issues being dealt with by the association. He says he is currently visiting all the distilleries and having discussions with their operators to acquaint himself with their positions and issues.